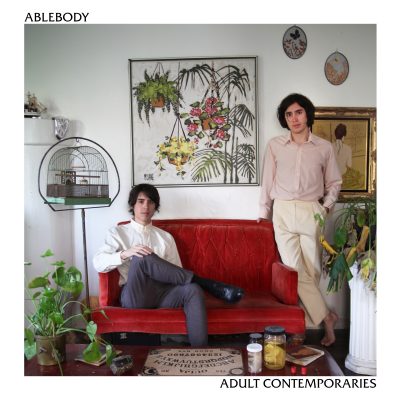 Ablebody, comprised of identical twins Christoph and Anton Hochheim (The Pains Of Being Pure At Heart, The Depreciation Guild), draws from the raw richness of the 60s; the melodicism of soft 70s pop; and the sophisticated side of romantic 80s synth pop to create a sound suspended between decades. The LA-based duo has been active since 2013,  self-releasing an EP and a 7″ single, crafting remixes, and demoing original material as well as myriad covers. On debut LP Adult Contemporaries, they take their sound from the bedroom to the studio, working with producer Kenny Gilmore (Ariel Pink’s Haunted Graffiti) to craft songs with a more visceral edge than they’ve explored in the past. Daniel Rosenbaum (Pomar) and Jordan Sabolick (Mt. Ossa) have joined the duo to help bring the songs to life and add new dimensions to Ablebody’s live dynamic.

Christoph’s emotive, wispy baritone holds together an album of sonic twists and turns that opens with the agile, bouncy “Backseat Heart” and concludes with the pensive, immersive, and atmospheric “Wayside Glow.” Though generally low-key, the LP has moments of contained-yet-explosive grandeur, such as the metallic guitar solo that rises out of the arpeggios on spry single “Gaucho.” Another single, “Send Me A Letter,” makes use of guest crooner Sean Nicholas Savage, whose backing vocalizations are blended with synths to create otherworldly results. Students of the past but far from retro fetishists, Ablebody’s musical prowess is evident throughout the album’s 11 songs. Yet the songwriting remains tastefully direct, with arrangements that bend and move in surprising ways while blanketing the overarching sentimentality of the songs.

“[Their first EP, 2013’s All My Everybody,] managed to sound sophisticated, deeply romantic, whimsical, and enticingly sinister all at the same time… On Adult Contemporaries, they’ve stepped up their game… One thing that’s remained constant is their impeccable gift for song craft.” -Marion Hodges, KCRW