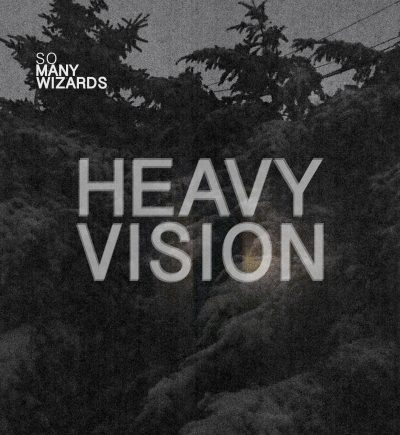 So Many Wizards is an airy, jangly dream-punk project from Southern California. Originally the solo bedroom adventure of multi-instrumentalist Nima Kazerouni, the project has evolved over several years into a fully-formed band (featuring guitarist Tomemitsu, bassist Devin Ratliff, and drummer Erik Felix) that has garnered attention from Pitchfork, Stereogum, Aquarium Drunkard, and Impose Magazine; spins on BBC 1, KCRW, and SiriusXM; festival stops at SXSW and CMJ; and performances with artists including Thee Oh Sees, Colleen Green, No Age, and more. The band’s sophomore LP, Heavy Vision, follows a period of tumult for Kazerouni that included the birth of his daughter, moves from Los Angeles to Tucson and back, a series of deaths, and the end of an 8-year-long relationship with the mother of his child. Those experiences were spiritually exhausting, culminating in a nervous breakdown. Yet, it was in the throes of this breakdown – what he refers to now as a “nervous breakthrough” – that Kazerouni was able to find a liberated epiphany through his contemplation of mortality. This emotional journey is chronicled on Heavy Vision, which contains the darkest, and most ambitious songs So Many Wizards has written to date.

The album begins with “Sic Boys,” on which tranquil, opening chords are pushed along by building drums and skittering cymbals. “Modern Way” speaks to those lost in the monotony of life over a melodic bass line and breezy guitar, while “Before She Runs” is a somber recollection of a failed relationship that features a buoyant rhythm and contemplative pre-chorus.  “It Comes For Us” is a rush of energy with its pounding drums, driving bass, and ripping guitar solo, while “Just Poison” and “Crows” draw inspiration from fellow frenetic heavy-strummer Jay Reatard. The album concludes with “Hash,” a thrashing number that offers moments of relief before thrusting back into the fray. In a way, the song reflects the philosophy Kazerouni has taken on through his experiences, that life is a series of chaotic episodes, interspersed with moments of serenity and solutions. It doesn’t stop, “so take it for what it is.”

“Lo-fi manic desperation packed into energetic pop songs… This is summertime music for sure and So Many Wizards do it so well.” -LA Record

“Heavy Vision…  is full of bright, chiming indie numbers that positively drip with homages to earlier pioneers like Syd Barrett and The Byrds. That said, the band manages to imbue a great deal of this with the sort of fresh approach that renders this record more than just a simple tribute album to the Sixties.” -A Pessimist Is Never Disappointed