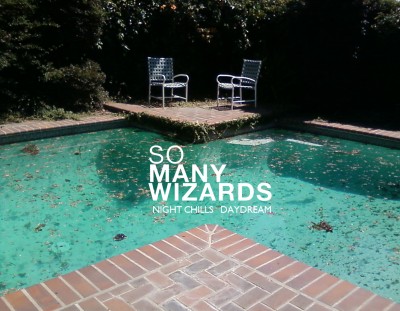 Since the release of Warm Nothing, So Many Wizards frontman Nima Kazerouni has seen a lot of the open road, and not within the context of touring with his bandmates under the moniker he incepted in 2009. Last year, Kazerouni left the Los Angeles skyline to follow his newly formed family to their new home base in Tucson, AZ. Over the course of the next year, Kazerouni would travel to Los Angeles to write, record, and play a string of shows, then travel directly back to Arizona to be with his newborn daughter. This type of transient lifestyle forced Kazerouni to spend weeks on couches and floors in the very city he grew up in. On their new “Night Chills / Daydream” 7” release on Lolipop Records, the band’s anxiety-strummed, jangle-pop is still at the core of each song, but there’s an outer layer of grit & a touch of darkness apparent, mainly due to the conditions Kazerouni found himself in the past year. “Night Chills” begins with a guitar sound that resembles a deep breath before launching into its driving verse. Newly added Melody Carrillo leads the track with a spiraling guitar line, emphasizing the lack of control in Kazerouni’s past year. The B-side, aptly titled “Daydream”, carries on the escapism trope, only this time with the music following suit. A stoney, laid back guitar riff and dreamy lead opens the song as Kazerouni wonders, “where did the day go?” Bassist Devin Ratliff shifts from a steady to syncopated bass line, giving the song the boost needed to reach the heights of its thrashy chorus, making for one of the heavier moments in So Many Wizards’ discography.