The So So Glos 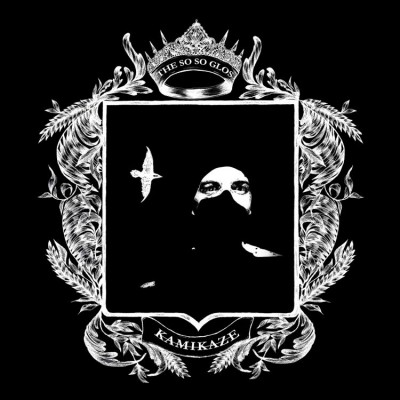 On Kamikaze, The So So Glos‘ follow-up to 2013’s critically-acclaimed Blowout, the darks are darker, the lights are lighter, the loud is louder, and the quiet is quieter. Recorded with John Reis (Drive Like Jehu, Hot Snakes) and mixed by Mike Mogis (Bright Eyes, Rilo Kiley, Cursive), the LP finds the grimy, snarling Brooklyn-born DIY heroes narrowing their focus and kicking harder and faster to punctuate their subversive merging of sarcasm with sincerity, spirituality, and social awareness.

The LP’s opening track and mission statement is “Dancing Industry,” an anthemic tribute to the transformative power of music. According to frontman Levi Zaru (aka Aleksander So So Glo), “Kamikaze is about using our self-imposed weapon, which is music… art… freedom of expression, [and] respect for the individual. All that is a weapon.” Elsewhere, Kamikaze features some of the Glos’ rawest songwriting yet, with lyrical themes surrounding heartbreak, hurricanes, feminism, climate change, nervous breakdowns, and more. Amidst songs about feeling disillusioned by moral compromise, there’s a glimpse into one band member’s stay at a mental rehabilitation center (“Inpatient”), a critique of the dungeon that is the music business (“Fool On the Street”), a ferocious treatise about sticking to your missions (“Missionary”), and an incredibly catchy response to informational overload anxiety (“A.D.D. Life”). As always, Zaru and bandmates Ryan Zaru Levi, Matt Lasser-Elkin, and Zach Assa-el Staggers have made a perfect party soundtrack — if your idea of partying involves screaming against the world of distractions and psychic destruction that surrounds us!

“[The So So Glos] knock out big, snotty, hooky monster-jams that grab your ear right away.” -Stereogum

“The Glos… sound like the unholy offspring of local hip-hop group Beastie Boys and bratty UK punk band The Boys.” -Consequence of Sound