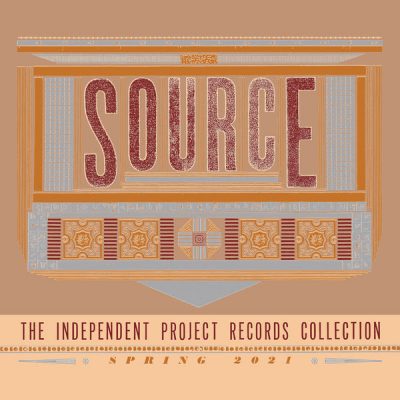 Founded in 1980 by musician and artist Bruce Licher, Independent Project Records has created more than 60 releases since its inception. Situated at the base of the Eastern Sierras in Bishop, California, IPR and its sister entity Independent Project Press are known for their instantly recognizable hand-printed record covers for bands including Camper Van Beethoven, For Against, Polvo, REM, Savage Republic, Silversun Pickups, Stereolab, and more. Aside from creating all artwork on his vintage two-ton hand-fed letterpress, Licher was nominated for a Grammy Award for his design work on the IPR released debut album from For Against. In 2020, the label relaunched by both Licher and Jeffrey Clark with new and archival releases with distribution from Darla Records.

Source – a new compilation – both surveys the history of Independent Project Records and gives a taste of what’s in store as IPR prepares to relaunch with an extensive series of reissues and archival digs. Sure, there are cuts by some of the leading bands of the late twentieth century from the Western US who blended post-punk, psychedelia, and atmospheric soundscapes, like Shiva Burlesque, Red Temple Spirits, The Ophelias (SF), and Licher’s groups Savage Republic and Scenic. Yet there are also acts working at the edge of rock and experimental trance music who never found a big alternative audience, and there are even goodies by icons who haven’t previously issued music on IPR like David J of Bauhaus and Love And Rockets. Spiced by alternative mixes, rarities, and demos, Source is a sampler of musicians determined to forge their own unique musical identities. Additional new, full-length IPR reissues will include remastered, expanded and long out-of-print titles from influential bands Half String, Scenic, Shiva Burlesque and The Ophelias, again utilizing IPR’s iconic hand-letterpress printed artwork created at Independent Project Press. With the kind of evocative cover design that has made IPR releases as immediately identifiable as those of iconic companies like 4AD, Elektra, Factory, and Impulse!, it’s also a label that will continue its mission to sound and look like no other, in the mainstream or the underground.