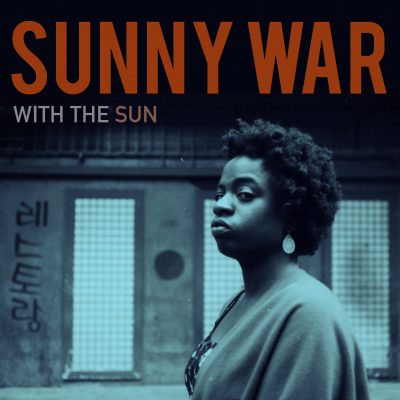 Los Angeles-based street singer, guitarist, and roots music revolutionary Sunny War has always been an outsider with the drive to define her place in the world through music and songwriting. She started life in Nashville, learning the blues from a local guitarist, and became a punk upon moving to Los Angeles in her teens. But though she played house shows with the likes of FIDLAR, she felt like a bit of an outsider as she worked to bridge her foundation in country blues and American roots guitar traditions with the punk scene she called home. She first made her name for her wickedly virtuosic touch on the fingerstyle guitar, but on her new album With The Sun she has shifted her focus towards incisive songwriting that poetically tells her story while touching on everything from police violence to alcoholism to love found and lost.

To help achieve With the Sun’s larger vision, War turned to the ragtag group of Venice Beach musicians – mainly members of psych-folk band Insects vs. Robots – including percussionist Micah Nelson, fiddler Nikita Sorokin, and guitarist Milo Gonzalez. Produced by Harlan Steinberger at Hen House Studios in Venice Beach, the album pushes and pulls between cleverly-arranged orchestration and DIY aesthetics. Considering the artist’s diverse influences, which include Chet Atkins, Black Flag, Joan Armatrading, and Robert Johnson amongst others, the album is both remarkably cohesive and difficult to pin down. As an artist, War borrows ideas and patterns at will from across the canon of American music; “I only use the scales and techniques that I know and the only time I was trained in music was on blues guitar.”  Yet Sunny War’s overriding strength is her ability to create new sounds from existing patterns. That’s why it’s difficult for her or the listener to pin down the influences behind each song. She’ll refer to some songs as bluesy, to others as mountain music, and to some as punk. Yet they truly all sound like only one thing: Sunny War. She’s a singular artist, driven by her own vision and compelled to write what she knows. As she sings on the album, “It’s my life. Gotta live it.”

This digital servicing of With The Sun contains a clean edit of focus track “Gotta Live It,” along wth the non-album single “Age Of Man.”

“She works with a lilting vibrato that recalls the great jazz vocalists of the 1950s, and as she maneuvers her fingers across her guitar, she doesn’t need to shout to express anger or sorrow.” -Los Angeles Times

“The songs on With The Sun evoke a wondrous, breathless beauty and are filled with hypnotic, acoustic calm. Her songs are exemplified by her tender voice, her unique style of guitar playing and her ability to touch the listener’s heart with her lyrics.” –WXPN’s World Cafe