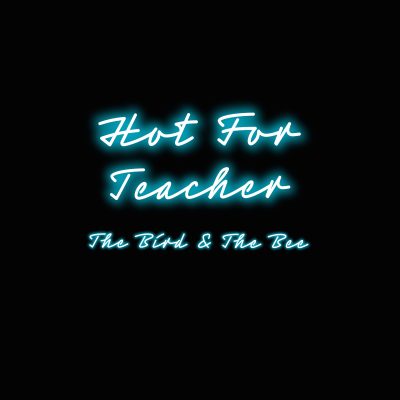 The Bird And The Bee, the LA-based duo of Inara George and producer Greg Kurstin, have released a third advance single from their upcoming LP Interpreting The Masters Volume 2: A Tribute To Van Halen. The album is a collection of David Lee Roth-era Van Halen covers, and serves as a sequel to the band’s 2010 fan-favorite set of Hall And Oates covers. The full thing comes out next month, followed by a 15-date tour. Now, however, fans have an opportunity to hear The Bird And The Bee’s take on the last song Van Halen released before its initial split with Roth. On “Hot For Teacher,” which features legendary drummer Omar Hakim (David Bowie, Sting, Daft Punk, Weather Report, Madonna, Kate Bush), the duo is joined by musical friend Beck.

Kurstin has been collaborating with Beck as a producer since the Sea Change era, recently winning Grammys for Best Alternative Album and Best Engineered Album for 2018’s Colors. According to Beck, who voices the ‘teacher’ on the track, “The Bird and The Bee bring unforeseen angles to the Van Halen song book. It makes sense because, like Eddie Van Halen, Greg is a kind of musical wunderkind in his own right and Inara’s vocals bring a cool counterpart to Diamond Dave’s pyrotechnics. Making a cameo on their version of ‘Hot for Teacher’ felt like an extension of the kind of riffing and fooling around we do in the studio on a normal session.” In addition to “Hot for Teacher,” the band has recently shared their new-wavy, fever dream rework of “Ain’t Talking ‘Bout Love,” from Van Halen’s 1978 self-titled debut, as well as “Panama,” on which Kurstin’s lush piano work replaces the revved-up guitar riffs of the original.

“The Bird and the Bee’s version of “Hot for Teacher” cleverly flips the hair metal classic into a hot jazz tune, with Eddie Van Halen’s iconic guitar riff transformed into a rollicking organ rumble while George croons the tune as if she’s on stage at a smokey lounge.” -Rolling Stone

Label: No Expectations/Release Me Records