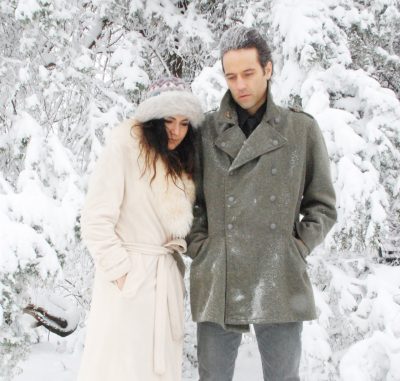 On last year’s Let’s Die Together LP, The Smoking Flowers presented an urgent and cathartic story about a couple that lives together, writes together, plays together, and simply loves life together. The album was a response to Kim Collins’ triumphant battle with breast cancer, a battle that she faced head-on with her husband and musical partner Scott Collins. The record was full of rockers, earning comparisons to The White Stripes and The Black Keys, but The Smoking Flowers also have a softer side. On companion LP Snowball Out Of Hell, they exchange electric guitar and pounding drums for stripped-down, acousic arrangements.

“While the sound isn’t bluegrass, it has the feel of a bluegrass band that plays and sings around a single microphone.” -Americana Highways

“Sure to melt any heart.” -Paste

Get this song, along with The Smoking Flowers’  full 2018 LP Let’s Die Together, on our download page. Visit amanaplanacanal.com/wp-login.php; use [email] as your user name and AMAPAC2000 as your password to get this and all the releases we’re promoting.