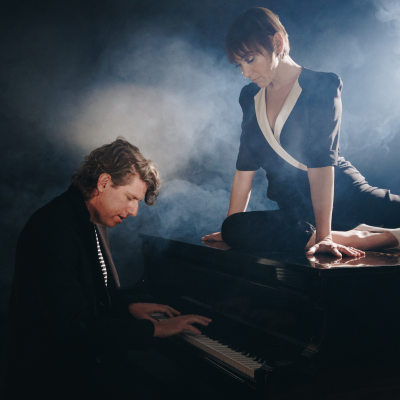 Since forming in 2005, The Bird And The Bee have brought a breezy elegance to their music, putting their own idiosyncratic twist on time-bending indie-pop. When we last checked in with the duo, they had just presented the dreamlike and dance-heavy album Recreational Love. Since that triumph, vocalist Inara George has released a solo album (Dearest Everybody) on her new Release Me record label (which also houses up-and-comers Alex Lilly and Samantha Sidley), while producer and multi-instrumentalist Greg Kurstin has continued his Grammy-amassing career making records with everyone from Beck to The Foo Fighters to Kendrick Lamar to Adele. Now the duo is back with their unique and catchy sound on some of the biggest Van Halen hits of the David Lee Roth era. Interpreting The Masters Volume 2: A Tribute To Van Halen  serves as a sequel to the band’s 2010 fan-favorite set of Hall And Oates covers and features guest appearances by the likes of Beck and legendary drummer Omar Hakim (David Bowie, Sting, Daft Punk, Weather Report, Madonna, Kate Bush).

The album both sheds new light on the glory of classic VH and further proves the playful brilliance of The Bird And The Bee. This time around, George and Kurstin find common ground with their source material in a shared affinity for fantastically intricate rhythms, unforgettable melodies, and—most essentially—a certain ecstatic spirit imbued into every song. According to Beck, “The Bird and The Bee bring unforeseen angles to the Van Halen song book. It makes sense because, like Eddie Van Halen, Greg is a kind of musical wunderkind in his own right and Inara’s vocals bring a cool counterpart to Diamond Dave’s pyrotechnics.” In addition to nine choice Van Halen picks, the album concludes with a live version of the original song (from 2009’s Ray Guns Are Not Just the Future) inspired by the frontman.

“The Bird and the Bee’s version of “Hot for Teacher” cleverly flips the hair metal classic into a hot jazz tune, with Eddie Van Halen’s iconic guitar riff transformed into a rollicking organ rumble while George croons the tune as if she’s on stage at a smokey lounge.” -Rolling Stone

“What would have happened if Eddie Van Halen’s ’80s keyboard fascination had manifested itself a decade earlier? Or what if David Lee Roth’s machismo was swapped for the angelic vocals of a female singer?” -Loudwire