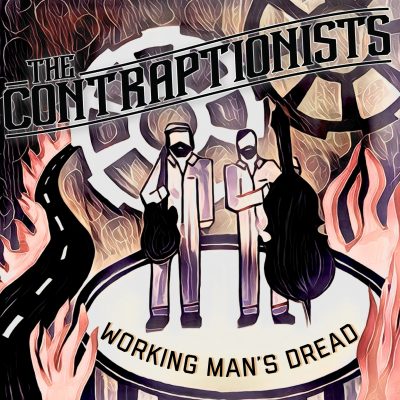 Paul Givant and Stephen Andrews are The Contraptionists: a two-man, one-man band, a sonic high-wire act driven by percussive precision, soaring, jangling, thumping instrumentation, and bold melodies fused with harmonies. An industrial folk-grunge experiment conceived and crafted in the booming halls of their loft on the edge-of-downtown-Los Angeles in a former factory, they bring fire, heart, and flash to their stage performance. Givant and Andrews have played together for almost a decade in Rose’s Pawn Shop, releasing three studio albums and touring extensively.

The Contraptionists evolved from RPS and takes some of its Americana folk threads, weaving and warping them through a stylized set of musical machines— “contraptions” made from drums, guitar, banjo, harmonica, stand-up bass, and vocal harmonies. With technical skill and creative bravado, the Contraptionists combine a working man’s grit with a rambling man’s fervor to create a big, layered sound with just two bodies. The duo make music out of American reflections, the dreams and nightmares seen in a far off motel room’s broken television screen. Stylistically and lyrically, the music is an alloy of rock and folk elements- murder ballads, road legends, and love story songs for the hopeful and broken-hearted.

“Californians who can howl, harmonize and finger-pick with all the confidence of their Nashville peers.” –Rolling Stone Country

“This highly charged band manages to create their own unique sound, in large part due to the craftiness of the songwriting, their storytelling and the musical virtuosity.” -WXPN