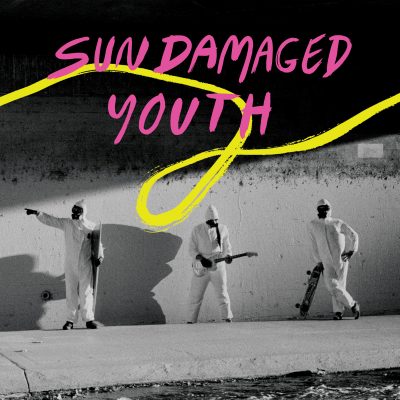 In early 2018, the California trio of Tim Denardo, Anthony Lukens, and Sam Sprague – also known as The Donkeys – found a notebook in an Adventureland trash can at Disneyland. Waterlogged and covered in churro dust, the book turned out to contain flights of teenage science fiction fantasy – whole worlds, in fact. Those half-finished wasteland musings inform the Los Angeles/San Diego trio’s fifth album, an apocalyptic surf saga, an endless irradiated summer: Sun Damaged Youth. Part lost radio transmission, part interplanetary concept album, the record takes its cues from classic FM compilations and surf records, interspersing the Donkeys’ signature choogling pop with DJ banter and reverb-drenched instrumentals. The LP channels the feverish energy of found-object outsider art, paying homage to the classic West Coast melodicism of The Beach Boys and The Grateful Dead as well as the California skate and surf punk of the late ‘70s and ‘80s. Adopting a series of fictional surf band guises – The Coffin Nails, The Savage Detectives, The Divine Invasions – the band plays in the weird space between fact and fiction, conjuring up a series of true stories, some of which might have actually happened, and many which probably didn’t.

Founded in 2003, the Donkeys have spent much of the last decade and a half on the road with bands like The Hold Steady, Magnolia Electric Company, Deerhoof, Cass McCombs and others. In 2009, the band provided the music for Geronimo Jackson, a fictional band on ABC’s LOST. Sun Damaged Youth was recorded with engineer Jason Quever of Papercuts and, following a string of releases on Dead Oceans and Easy Sound Recording Company, is the inaugural release by the band’s own Flop Records imprint. It represents a demarcation point for the band, reconciling the responsibilities of its members navigating marriage and fatherhood while pursuing the sunbaked enthusiasms of young adulthood. “Watching the bills just pile up/Oh man, I think I’ve had enough,” sings Denardo on “We Are All So Young,” balancing sun-shiny pop with the bittersweet recognition that he’s got to grow up, like it or not. Like the band’s cross-genre sound – equal parts Paisley Underground psychedelia, rustic folk, and warbled surf – the record blurs the lines between fantasy and fact. In its sun-warped grooves, “Kool Kids” make it in spite of themselves, stoned teenaged “Summer’s Dreams” maturing into something worth holding on to forever. Here come the waves.