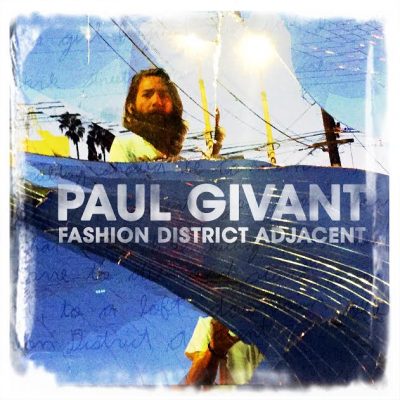 Fashion District Adjacent, produced by Grammy Award-winning
producer Ted Hutt​ (Old Crow Medicine Show​, Flogging Molly​,
Gaslight Anthem​, Dropkick Murphys​) is the first solo release from Paul Givant, the founder of the heralded Americana band Rose’s Pawn Shop​. In a departure from that group’s up-tempo and oft-raucous sound, on the new LP Givant dives into a more introspective, textured, and lush indie-folk-Americana landscape. After working with Hutt on Rose’s Pawn Shop’s third album Gravity Well, and surviving more than a few dark nights of the soul on the far edges of downtown Los Angeles, Givant began to explore more deeply his own personal experiences and history. Fashion District Adjacent seethes with self-confessional details and a sometimes-sarcastic bite, viscerally depicting the process of grieving the end of a long-term relationship and tracking it from the earliest, lost days towards the eventual rise from grief into the possibility of something new.

Givant was born and bred on the fringes of LA, and he’s been shaped musically and spiritually by the valleys and hills of Southern
California; its diverse extremes of culture and geography; and its
vibe as a mecca for lost souls and lonely hearts, wandering artists and wannabe mystics, folk heroes and Rock n’ Roll rebels. With Rose’s Pawn Shop he’s released three studio albums and toured relentlessly, growing a fan base drawn to its unique, soulful, and energetic tangle of folk, rock and punk roots with complex vocal harmonies, driving beats and heartache-forged lyrics. The songs on Fashion District Adjacent are lyrically sharp and wryly self-aware, while his broad instrumental and stylistic versatility draws on elements from his past work and expands them. All told, it’s a uniquely personal but relatable chronicle of love and loss, survival through the end of one world and living on into the next.

“[Paul Givant and Rose’s Pawn Shop] can howl, harmonize and finger-pick with all the confidence of their Nashville peers.” – Rolling Stone