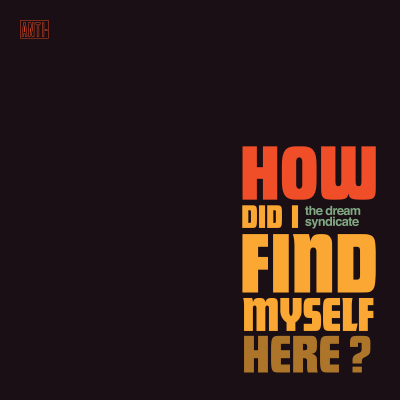 Seminal indie rock band The Dream Syndicate has released their fifth studio album and first since 1988, How Did I Find Myself Here? Formed in Los Angeles in 1981, The Dream Syndicate was founded by current members Steve Wynn (guitar, vocals) and Dennis Duck (drums) along with Karl Precoda (guitar) and Kendra Smith (bass). With its widely celebrated 1982 debut The Days of Wine and Roses, the band emerged at the forefront of 1980s college rock as ambassadors for a so-called “Paisley Underground” scene in Los Angeles that included peers like The Bangles, The Three O’Clock, and Opal (a precursor of Mazzy Star). The band split in 1989 after releasing a total of four albums, but over the years The Dream Syndicate has proven to be a massively influential force; Kurt Cobain listed the band among his inspirations, Prince named his studio Paisley Park in reference to the Paisley Underground, and allusions to the band’s jangly neo-psychedelia have crept into the sounds of contemporary bands like The Allah Las. According to Wynn, “The Dream Syndicate was largely about receiving, carrying and then passing along a torch of the bands that we loved passionately but who didn’t necessarily get the love and attention they deserved, living in the shadows as cult favorites, secret passwords into a society of musical fanaticism and time-delayed impact on generations to come.”

The band reunited in 2012 and has since played over 50 shows and toured throughout the US and Europe with a lineup that now includes guitarist Jason Victor and longtime bassist Mark Walton along with Wynn and Duck. “When we reformed the band and people would ask about a new record,” Wynn recalled recently to Aquarium Drunkard, “that was kind of in the back of my mind.” However, “this particular lineup really evolved… Every time we’d play a show, people would leave saying this is a really good band. That became the motivation for making a record – just to be able to say, this is who we are right now and we think you’re going to dig it. On top of that, I wanted to keep playing shows and touring, but didn’t want to be confined by being a nostalgia act and only playing old songs.” Of the creative process, he says, ““[The magic] was there. It sounds like everything that I loved about The Dream Syndicate.” With its heavy grooves, hypnotic guitar work, and gorgeously fractured textures, How Did I Find Myself Here? feels both classic and forward-pushing.

“The Dream Syndicate have miraculously avoided creative stagnation, even 35-plus years into their existence, defying the usual rock-band career arc…” -The Stranger

“The Dream Syndicate aren’t making a comeback, they’re picking up right where they left off.” -WXPN

“Loud as f**k… in the best way possible.” -Aquarium Drunkard

Listen to the album’s title track, “Glide,” and “Filter Me Through You” below: