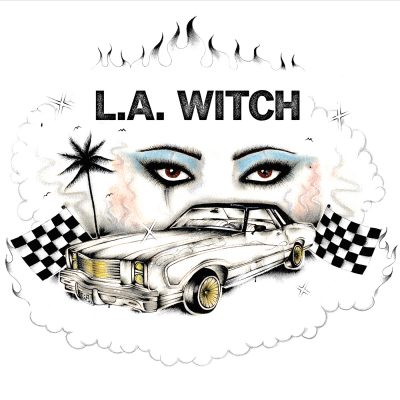 After touring nearly non-stop for the last three years and releasing a handful of limited-edition singles, the Los Angeles three-piece L.A. Witch has developed a singularly seductive, haunting, and wistful sound. On their eponymous debut album, their reverb-drenched jangle and sultry vocals conjure the analog sound of a collector’s prized 45 from some short-lived cult band. The melodies forgo bubblegum pop for a druggy haze that straddles the line between seedy glory and ominous balladry; the lyrics seem more descendent of Johnny Cash’s first-person morality tales than the vacuous empty gestures of pre-fab pop bands; and a simple instrumental beauty provides an economic grace that renders studio trickery unnecessary. This isn’t music for the masses – it’s music for miscreants, burnouts, down-and-out dreamers, and obsessive historians.

Album opener “Kill My Baby Tonight” is the perfect introduction to the L.A. Witch world, which marries a ‘60s girls-in-the-garage charm with David Lynchian surrealist exposés of Southern California’s underbelly. Sade Sanchez’s black velvet vocals and grimy guitar twang disguise the malicious intent of this murder ballad, with the thumping pulse of bassist Irita Pai and the slow-burn build of drummer Ellie English beguiling listeners into becoming willing accomplices to its narrator’s crimes. “Brian” follows the opening track with a graceful, yet ominous, slow-motion take on a well-worn jukebox single. It’s a vibe that permeates the entire album, from the early psychedelic hue of 13th Floor Elevators on tracks like “You Love Nothing,” to the motorik beat and fuzzed-out licks of “Drive Your Car,” and through the grittier permutation of Mazzy Star’s sleepy beauty on “Baby In Blue Jeans.” L.A. Witch was recorded at Hurley Studios in Costa Mesa, California and mixed in North Los Angeles.

“If you’ve never before been surfing or had a wheatgrass smoothie or participated in a cultlike ritual in the spooky hills above Los Angeles, LA Witch’s ‘Kill My Baby Tonight’ will have you signing up for all three before you can say Joan Didion.” -The Cut

Listen to “Kill My Baby Tonight” by L.A. Witch here: