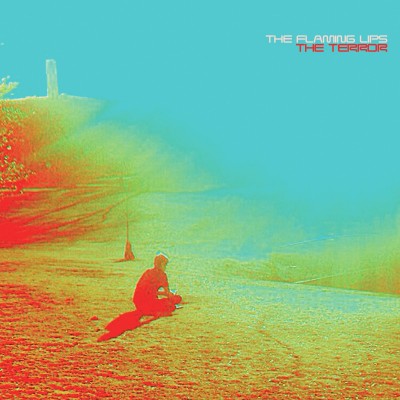 The Flaming Lips have been on a musical journey since their last album in 2009, Embryonic. After its release, came: a live recording of their classic Soft Bulletin, collaborations with the like of Bon Iver, Neon Indian, Yoko Ono, Henry Rollins, Lightning Bolt and more, a 24-hour long song, and a spot in the Guinness Book of World Records for most live shows played in a 24-hour period. Still, in that journey were some spiritual battles. During this time, Flaming Lips co-conspirator Steven Drozd found his life once again co-habiting a negative space. As the group entered the recording studio for The Terror, Drozd‘s demons joined too. He’d sometimes go into a separate studio to focus on his ideas and help himself “get through the day”, he shared in a Pitchfork interview. The result is one of most groundbreaking and personal Flaming Lips‘ records to date. The album begins with a visceral oscillating synthesizer followed by clanging drums.Wayne Coyne‘s vocals have a hint of desperation, as if there’s a bigger power holding him back. The track ends with blips of Coyne optimistically pointing out, “Look, the sun is rising” before we’re enveloped by a grim coat of sound. After two collaborative albums (Heady Fwends & Dark Side of the Moon), it was consciously decided to keep the creative process within the group’s core members, only allowing room for Phantogram to briefly guest on the claustrophobic and epic “You Lust”. “Turning Violent” softly pulsates into thunderous washes of buzz. “You want violence, don’t turn violent”, Coyne pleadingly sings in a falsetto as the waves of music come crashing down on him. Within the walls of darkness, The Flaming Lips still manage to find some hope. On the final track “Always There In Our Hearts”, guitars and drums clash against each other and a vibrating wobble looms with Drozd concluding, “A joy of life that overwhelms, overwhelms.” It’s a brief glimmer of hope, but it’s at a point where we’ve come to realize that we are at the end of our journey, and alive.