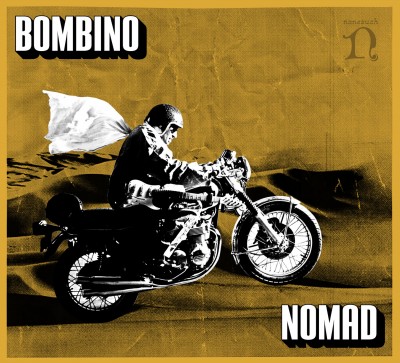 Released today on Nonesuch Records we bring you Nomad, from the Tuareg guitarist, singer, and songwriter Omara “Bombino” Moctar. At the invitation of Dan Auerbach from The Black Keys , the Niger-born artist and his band traveled to Nashville to record the album in Auerbach’s studio, Easy Eye Sound.

While living in Algeria and Libya in his teen years, Bombino’s friends played him videos of Jimi Hendrix and Mark Knopfler, among others, which they watched over and over in an effort to master their styles. Bombino worked regularly as a musician and also as a herder in the desert near Tripoli, spending many hours alone watching the animals and practicing his guitar. Eventually, Bombino returned to Niger, where he continued to play with a number of local bands.

It’s through the sound of his work, at least initially, that Bombino communicates with listeners outside his homeland. Throughout Nomad he recalls the time he’s spent in the desert and those he has left behind during the upheavals that repeatedly sent him and his family into exile. As Bombino says: “With the songs from Nomad, I want to explain what life is about to the Tuareg people, what’s important to them.”