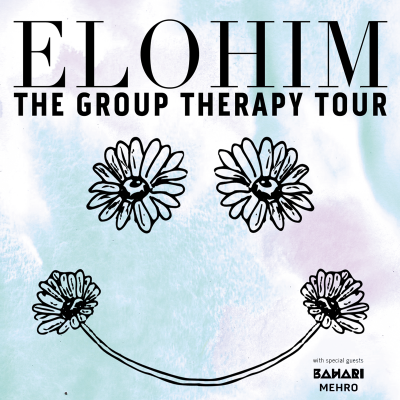 Since Elohim‘s first single “Xanax” debuted in 2015, she’s gathered fans around the world on the strength of songs that deal with themes of mental illness. Her self-reflective 2018 debut album included songs like “Panic Attacks,” and The FADER wrote after her Coachella performance that year that “it’s partly due to Elohim’s unfailing openness about anxiety and depression” that she has such an active and connected fanbase. In 2019, she released the Braindead EP and donated proceeds of its sales to mental health iniatives and suicide prevention. Now, she is embarking on a full headlining tour of the United States that embraces the concept of healing: The Group Therapy Tour, which begins February 21 at Elsewhere in Brooklyn. She’ll be joined on the tour by alternative-pop artists Bahari and newcomer Mehro. Bahari, comprised of singer/bassist Natalia Panzarella and singer/keyboardist Ruby Carr, are known for their rich harmonies and have previously toured with Selena Gomez and Birdy.

In conjunction with the tour, Elohim is releasing a single called “Group Therapy” and Mehro is releasing debut single “Perfume.” These songs are serviced here, along with Bahari’s standout single “Savage.”