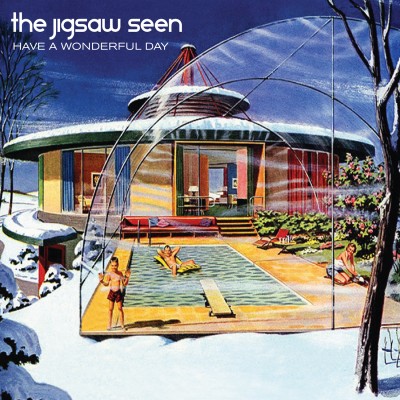 Venerable Los Angeles rockers The Jigsaw Seen are back with their first release for Burger Records, a single called “Have a Wonderful Day” that is a formidable addition to the already impressive canon of these crucial garage rock legends. Since forming in 1988, the Jigsaw Seen has been featured on Rhino’s box set “Children Of Nuggets: Original Artyfacts From The Second Psychedelic Era” compilation, nominated for a Grammy, and championed by the likes of Rodney on the ROQ, the Kinks’ Dave Davies (who invited guitarist Jonathan Lea to join his band) and producer Steve Lillywhite (Talking Heads, Morrissey).

“Have a Wonderful Day” is the band’s version of a three-minute summation of the world, offering paranoia with a side of impending doom. Recorded between New York, Los Angeles, and Vicenza, Italy, the song is driven by start/stop drumming, Mick Ronson-esque guitar riffs, and an epic T-Rex-ian conclusion fueled by the sawing cello playing of bassist Tom Currier‘s sons Ry and Finn. The single release also includes a new “single mix” of We Women, one of the highlights of the band’s critically-acclaimed 2014 release Old Man Reverb, and a version of Dry Ice‘s UK obscurity “Running to the Convent” that was recorded live at Northern California’s KFJC.

Though this single is being serviced as digital-only, the band has graciously offered to burn CD copies of it for any station that wants one. Request one by replying to this email with “Burn Me the Jigsaw Seen” in the subject line.

“The Jigsaw Seen is about due for a Lifetime Achievement Award.”
-Magnet