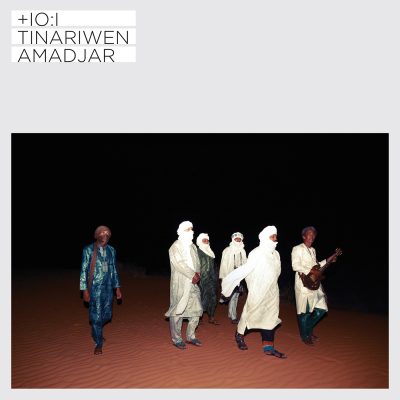 The best Tinariwen music isn’t the music they perform in front of microphones. It’s the music they play at night around the fire, back in their own country, amongst themselves and at their own pace. Having eaten, and drunk their tea, the men bring out their guitars, chat, remember old songs and let the music come. In those moments, the music rises up like a shower of sparks or a state of grace, without premeditation; the momentary manifestation of a friendship, a community, an environment, and their revelatory connection. Tinariwen is a desert band, only certain aspects of which the western music industry can ever hope to nail down. Yet Amadjar, a nomadic album recorded in a natural setting, may be as close as an album has ever come to capturing Tinariwen.

The creation of Amadjar, the ninth Tinariwen album, began at the Taragalte Festival of nomadic cultures in the Moroccan Sahara in October 2018. After a concert and a sandstorm, the band headed for Nouakchott, the capital of Mauritania, via southern Morocco, the Western Sahara and the Atlantic coast. Joined by their French production team, they camped under the stars, communed with one another, and workshopped ideas for a couple of weeks before arriving in the desert around Nouakchott. Then, during a final two-week camp in the desert joined by The Mauritanian griotte Noura Mint Seymali and her guitarist husband, Jeiche Ould Chigaly, they recorded their songs under a large tent in a few live takes without headphones or effects. Once recorded, a host of Western musicians added instrumentation including violin from Warren Elllis of The Bad Seeds, mandolin and charango courtesy of Micah Nelson (Particle Kid, Neil Young’s Promise of the Real), and guitars from Cass McCombs, Rodolphe Burger, and Stephen O’Malley (Sun O)))).

“Tinariwen can provide exultation and encouragement like few other ensembles, on any continent.” -Pitchfork

“Throughout the album, Tinariwen are back to their implacable best.” -Financial Times

“Amadjar is a well-constructed, deeply mesmerizing album by one of the finest bands out of Mali.” -World Music Central