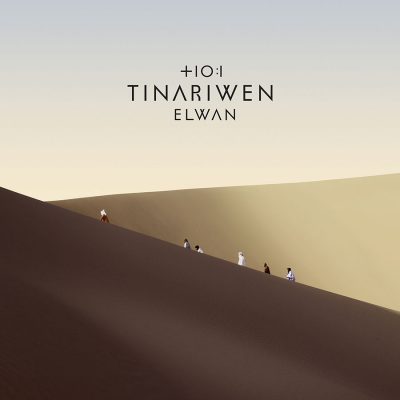 Road movies often unfold the same way, with characters traveling in search of truth while reconnecting with a past that has – of course – been erased. Tinariwen‘s Elwan has a similar story, coming from a band that has been triumphantly touring the world at the same time as the frontiers that encircle their desert home have been closing and forcing them into exile. In recent years, Tinariwen’s homeland, a Saharan mountain range between north-eastern Mali and southern Algeria, has been transformed into a conflict zone. While the songs on the new record evoke those cherished deserts of home, they were recorded far away in two distinctive bursts. First, the band traveled to Rancho de la Luna studios in California’s Joshua Tree desert, with sessions engineered by Andrew Schepps (Johnny Cash, Jay-Z). Musicians who know the place well dropped by to add their own touches to the group’s pre-industrial boogie, including guitarist Matt Sweeny (Johnny Cash, Bonnie Prince Billy and Cat Power), Kurt Vile, multi-instrumentalist Alan Johannes (who produced the first few albums by Queens of the Stone Age), and QOTSA singer Mark Lanegan. The second wave of recording occurred later, in a Southern Moroccan oasis accompanied by the local musical youth and a group of Berber ‘gnawa’ trance musicians. The results will appeal to lovers of the band’s sensual and abrasive riffs – now buoyed by American guitars to reinforce the group’s signature ishumar style – as well as those who love the funky, danceable side of Tinariwen that comes through courtesy of a rhythm section in the mold of Sly and Robbie.

The result is musically powerful and yet poignant: every song evokes a lost world that can no longer be found, with an emotional range that goes from nostalgia for a joyous past to the tragic recent loss of a territory and the dreams it nourished. The emotional ‘bite’ of that loss imbues many of the songs, such as “Imidiwan n-akal-in” (Friends from my country), “Hayati” (My life) or “Ténéré Takhal” (What’s Happened to the Desert), “Sastanaqqam” (I Question You), and the deeply disturbing “Ittus” (Our Goal). Yet Tinariwen includes both older members, some of who have played with the band since 1979, and younger “kids.” Thus, while it deals lyrically with topics of despair, another compelling narrative of the album is the wonderfully symbiotic mix that comes from combining the weariness of the old fighters of the Touareg rebellion of the 1990s and the dynamism of a youth that’s still emerging. The meeting of two such disparate generations in one band is relatively rare in today’s musical world, and in Tinariwen it’s a meeting that celebrates the capacity of music to make experiences as intense and cruel as exile, beautiful and even attractive – experiences that would surely end up destroying those who lived them.

“Like everything the group does, ‘Ténéré Tàqqàl’ sways and pulls at the heartstrings, pure expression through both music and lyrics. As always, no melancholy is more sincere and no tale more elegantly told than Tinariwen’s.” -PopMatters

Check out “Ténéré Táqqál” below.