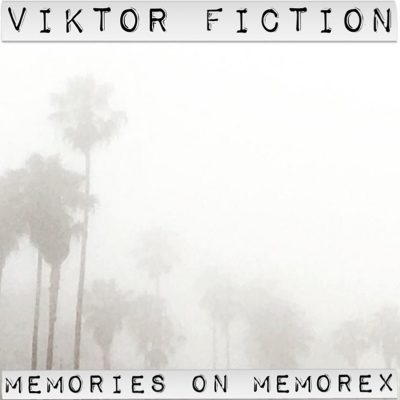 Veteran producer/engineer (Ty Segall, Wilco, Built to Spill, Jesus and Mary Chain) releases an EP of darkwave and 80s synthy post-punk in advance of a US tour opening for Moving Units.

Of Pulsar’s self-titled debut, released in 1997, Trouser Press wrote, “The album is one of the singular accomplishments of the 1990s– with it’s combination of indelible melodies and seemingly pre-mature bedroom vulnerability and obsessions, it’s a science fair version of Pet Sounds for the computer age.” Now, Dave Trumfio – the veteran musician who fronted Pulsars and has gone on to produce and/or engineer records for a vast and impressive group of artists including Ty Segall, The Jesus & Mary Chain, Wilco, Grandaddy, My Morning Jacket, The Rentals, Built To Spill, and many more – is back with Viktor Fiction, his new band/alter-ego. While the band’s second EP,  Memories on Memorex, will remind devoted Pulsars fans of their beloved sound, Viktor Fiction is an altogether different beast. For one, Trumfio has thrown away the Wizard Of Oz-like gadgetry of Pulsars’ live shows and opted for a live band to back his performative twitching, contorting, and singing. The band includes Trumfio’s long time production partner Celso A. Estrada (Islands, The Rentals, Beat Club, White Dove) on guitar/programs, and noted film composer Keith Ruggiero (Soviet) on synths. The rotating drummer slot has included to date Dan Joeright (The Rentals, David Bryne), Danny Deleon (Moving Units), Jorge Arroyo (Strange Ways, Ruido De Fondo), SIMO, and Michael Sanger. 2017 brings a run of touring dates with dance punk luminaries Moving Units (for whom Trumfio is currently playing keyboards).

Though Trumfio channels the synthy sounds of the 1980s on tracks including “Sheffield & School” and “Wake Up! Wake Up…,” his clever songwriting and melodic sense combine to insure that Viktor Fiction is not a nostalgia act. The four songs on Memories on Memorex solidly lay the groundwork of an emerging sound that is unique and familiar at the same time.