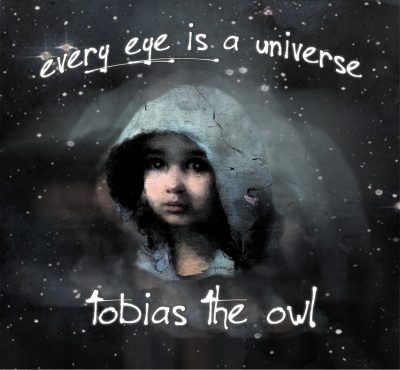 Elijah Dhavvan, who goes by the moniker Tobias The Owl, isn’t a typical singer/songwriter. His rich vocal tone, knack for writing heartfelt lyrics, and keen sense of melody have set him apart from the pack. Dhavvan proudly carries traditions inspired by his Moroccan ancestors — from the deeply spiritual tones of classical Sufi music to the community-shared folk of Berber culture. He has also spent years traveling, sometimes by foot, throughout North America, and through his journeys has gathered a diverse set of influences from Texas roots and folk traditions to deep Southern bluegrass, Canadian indie rock, and the acoustic music of the Pacific Northwest. These influences come together on his new album, Every Eye is a Universe, the spectacular follow up to his debut EP, Painting Zeroes By Your Name.

Recording at the iconic London Bridge Studio, where classic grunge albums including Soundgarden‘s Louder Than Love and Pearl Jam’s Ten were made, Tobias The Owl brought together an all-star cast of musicians to help make this album, including percussionist Scott Seiver (Aimee Mann, Tenacious D, Flight of the Conchords) and violinist Andrew Joslyn (Grieves, Damien Jurado) as well as producers Marvin Etzioni (Jonah Tolchin, Toad the Wet Sprocket) and Geoff Ott (Brandi Carlile). The album balances loose drums, tender guitars, and dense melodies. On standout tracks like “The Wind and the Echo,” “Murmurs,“ and “Sing Me to Sleep,” Tobias The Owl’s songs have a way of feeling introspective while maintaining a bright view of the future. “The album features very pensive songs about life and healing,” says Dhavvan. “I wanted to paint soundscapes that complement a lot of different emotions that emerge when one is dealing with loss and questioning the nature of fate.”

“Beautiful ballads mend the pain and heartache of one’s soul and give the listener a sacred realization of what is really important in life.” -Northwest Music Scene