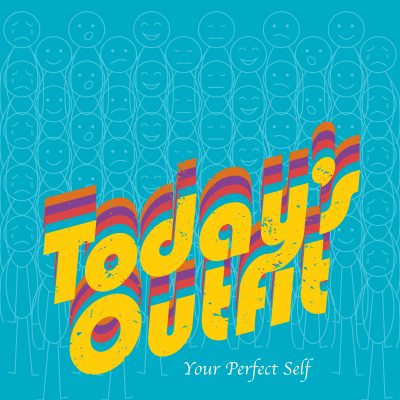 Today’s Outfit is Mark Garufi, Andrew Wood, and Grant Zacharias — a new trio that deftly employs 80s-influenced keyboards, post punk and classic rock heroics on a bass ranging anywhere from six to ten strings, slight grunge on the drums. Listeners may know Wood from his New York-based indie rock project Bridges and Powerlines, which released five records between 2006 and 2016, experienced runs on the CMJ Top 200, played high-profile shows with The Antlers, Adam Duritz, Chris Carrabba and many more, made multiple appearances at SXSW and licensed songs to Showtime’s Shameless and others. In 2020, Wood also released a solo record as Thurlowood. Discontinue Normal Program was hailed by MXDWN as “aching electro-pop… heavy, yet incredibly catchy.”

Your Perfect Self, the group’s upcoming debut social media-influenced EP, features anthemic rock songs with a modern take on dark new wave. Highlights include the singles “On Fire” – a kind of “Every Breath You Take” for the Instagram influencer generation with lyrics written in emojis – and “Follow Me,” a desperate cry for social media attention as cynical as anything since Pulp’s Common People. The band made its live debut in 2021 at Pelham, New York’s Toonerville Festival headlined by 90s stalwarts The Verve Pipe and Fastball.

“Imagine Peter Hook choosing his very favourite bassline and backing the more laconic, jangly end of the Pulp back catalogue and you are just about in the right Britpop musical ballpark here.” — Janglepop Hub