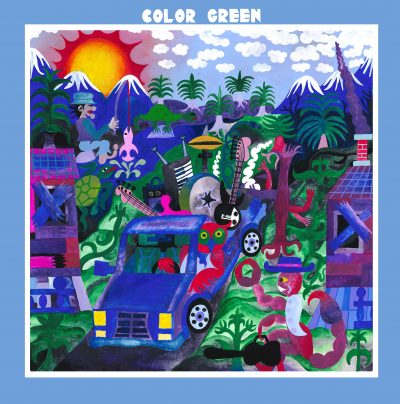 Color Green is an American rock and roll duo based in Los Angeles and consisting of Noah Kohll (Current Joys, Young Guv, Surf Curse, Dark Tea) and Corey Madden (Richard Rose, Grave Flowers Bongo Band). The fleet-fingered guitar gurus formed the group in Ridgewood, Queens in 2018 after jamming their way through a lengthy modal excursion into a particularly kaleidoscopic stretch of the astral plane. After two long, strange years spent recording and performing in mysterious spots of the Californian desert and worshiping nightly at the altar of Jerry Garcia, they released a four-song self-titled debut EP released by Maximum Exposure in 2020. Recently signed to ORG Music for a co-release with Aquarium Drunkard, Color Green makes a sound culled from the eternal solitude of working musicians, the feeling of infinite transition, and the need to create space.

Pulling from the Allman Brothers, Acetone, The Grateful Dead, and other acts from the dusty storage boxes of their attics, Color Green are searchers for a continuation of classic songwriting through the use of collaboration and close examination of the relics of yesterday’s past, while maintaining the spirit of their present selves. Their self-titled debut sees the duo blasting out of the gate at full strength. Equal parts fuzzy and twangy, the songs are  culled from many decades of the strange sounds of American music. Rambling rockers like “Ill Fitting Suit” and “Blizzed Out” are bookended by spacier numbers like “Bell of Silence” and “Verdolaga Dreams,” while songs like “Warbling Sky” are a blissful hybrid. The common thread running throughout is an unwavering devotion to the merits of classic songwriting.