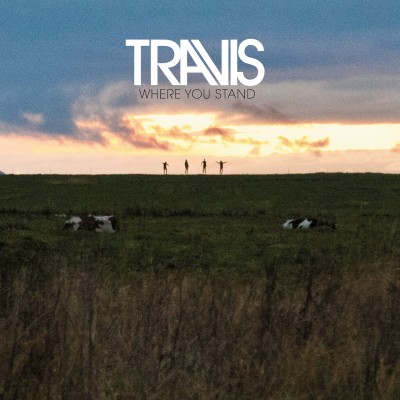 After their 2008 release, the Scottish quartet, Travis, decided to take a five-year hiatus. After eleven non-stop years of touring, recording and traveling, which included two number one albums and three BRIT awards, they took time to follow their personal pursuits. Finally, Travis returns with their latest album, Where You Stand. The album was produced by Swedish producer Michael Ilbert (The Hives) and recorded using studios/equipment that once colored such classics as David Bowie’s Low and Radiohead’s OK Computer. Totally reinvigorated, Travis adopted a newly democratized songwriting system which resulted in a spring-breeze-fresh-sounding, distinctly major-key-centric record all inspired by blooming home lives and expanded personal horizons. Created between London, New York, Berlin, and a tiny island off the coast of Norway, Where You Stand captures the group’s excitement to be back together. “You stay away as long as it takes,” says bassist, Dougie Payne, of Travis’ well-judged fallow period, “so you feel that hunger and desire to get back to it same as you did at the start.” That hunger and desire manifests itself from the first moments of opener “Mother” – a bracing rush of harmonic pop with a terrific chiming piano solo. “Moving” is instantly anthemic with its nu-wavey guitars and drums and lyrics that capture the hopeful mood of the album, “I feel alive, I am aware of the colors in the sky.” The album settles into a down tempo groove on “Warning Sign”, and picks back up on “Another Guy” with its understated guitar and driving rhythm. The album comes to a close with rhythmic track “Boxes” and finally, with the intimate and simple “The Big Screen.” Their seventh release, Where You Stand, will be released via Travis’ own label, Red Telephone Box. This uplifting album is the perfect way to wind down the summer and shouldn’t be missed.