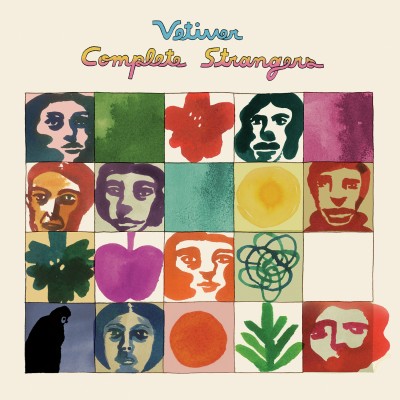 Vetiver is back after four years with their new album, Complete Strangers. The album’s introspective lyrics are paired with instrumentals that seem to fluctuate between melancholy and sunshine, producing a sound that is magnetic. This sound was not harnessed without the help of Bart Davenport, Gabe Noel and Josh Adams who are also featured on the album & Thom Monahan (Devendra Banhart, Beachwood Sparks, Sera Cahoone) who engineered and produced the  record.

Cabic describes the album as “someone I’ve just met yet known for a long time.” The songs have a familiar air about them, yet produce new melodies that draw you in. “Current Carry” plays with a prominent beat, blanketed with golden-hued guitar and relaxed vocals. The track “Shadows Lane” has poetic and whimsical lyrics that are made melodious with the drawn out vocals of Cabic. Their latest tune, “Loose Ends”,  premiered on Stereogum & strums along heavier than “Current Carry” but still remains light. Stereogum describes the whimsical track as “disguising Cabic’s wistful lyrics under a coat of winning, golden-hued jangle-pop. It’s an appealing formula, and you can hear it below.” Read the whole article here.

With wistful lyrics and breezy instrumentals, Vetiver’s Complete Strangers creates a sonic atmosphere that is irresistible.