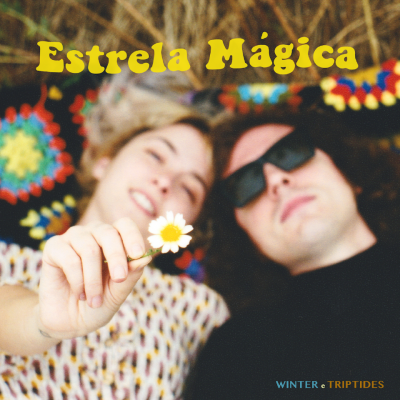 Estrela Mágica is a beautiful and inspired collaboration between Winter (Samira Winter) and Triptides (Glenn Brigman). The duo didn’t plan on making a record together; they simply set out to create the type of music they both loved. The pair first met in Los Angeles and immediately bonded over their mutual love of Brazilian music and culture. Winter, whose band has already seen radio success this year with the anthemic bedroom pop LP Ethereality, grew up in Brazil while Brigman was introduced to Brazilian music by a roommate who left him a deep collection of LPs upon moving to Rio de Janeiro. Combining South American influences with elements inspired by the sunshine psychedelia of the 60s, Winter and Brigman started together their favorite musical colors into new palettes while crafting Estrela Mágica over the course of two years. The music was recorded mostly in homes throughout LA, with Brigman’s Tascam 488 Portastudio tape machine acting as a common piece in all the sessions and capturing the nuances of each environment to give each song a unique voice and sound. While Winter and Brigman perform most of the music on the record, they were graced with the guest appearances of some their musical friends: Jason Simon (Dead Meadow), Julian Porte (Levitation Room), Modeste Cobián (The Buttertones), Mason Rothschild (Fever The Ghost), and Tiago Lobão (Nevilton).

The album is sung almost entirely in Portuguese, yet its nostalgic, hazy sound is easily – universally – understandable. Through melancholic ruminations on time and loneliness to blissful statements of friendship and peace, Winter and Brigman transcend language and plunge straight into the soul.

“Samba-like rhythms… melt together with their noise pop; it’s intoxicating and emotive.” -The 405

“Winter & Triptides embrace their common taste in music to embark on a mystical journey through ambient shoegaze, pulled off with effortless, tropical charm.” -The Line Of Best Fit