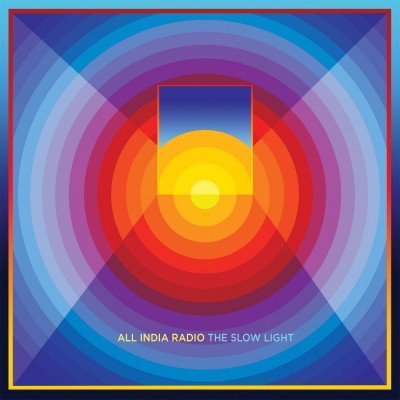 Fronted by Australian musician Martin Kennedy, All India Radio has been creating downtempo chillgaze since 1999. After the dissolution of Kennedy’s long-running rock band Pray TV, he struggled to find a new musical way forward until hearing a collection of tapes his former bandmate Aidan Halloran had recorded of street and radio sounds during a stay in Madras, India. Inspired, Kennedy began sampling the tapes and blending the recordings with his own ambient works to develop a distinct sound that combines layered guitars, atmospheric keyboards, and dubby beats. Over the next several years, the prolific producer collaborated with notable Australian luminaries including Steve Kilbey (The Church), Graham Lee (The Triffids), Ed Kuepper (The Saints, Nick Cave and The Bad Seeds), and David Bridie (Not Drowning, Waving) and garnered a 2003 Australian Recording Industry Award (ARIA) nomination for Best New World Album.

Four years in the making, The Slow Light is All India Radio’s tenth studio album and follows a critically-acclaimed collaboration with Kilbey on the score for the post-apocalyptic film The Rare Earth. Though the album is mostly instrumental, Kennedy’s spacey, ethereal tones are augmented by guest vocalists on two tracks: “Can You Hear The Sound,” which features Selena Cross on her first All India Radio song since 2006’s “Four Three” from Echo Other, and “Galaxy of Light,” which serves as the debut of Kennedy’s 12-year-old daughter, Hollie Houlihan-McKie. The album is also the first LP cover produced since the 1970s by visionary artist Victor Atkins — the winner of the 1969 Society of Illustrators Award for the striking cover he created for Miles Davis’ Miles in The Sky.

“All India Radio has mashed the ambient-hop signatures of DJ Shadow, Tortoise and Thievery Corporation with the instantly recognizable guitar soundtracking of Ennio Morricone and Angelo Badalamenti. The resulting narcotic musical textures are capable of floating listeners to galaxies far, far away.” -Wired

“Kennedy is a restless musical soul and prodigious creator… All India Radio albums feel like an amazing journey of the mind.” -PopMatters

Listen to Track 7, “Galaxy of Light,” below: