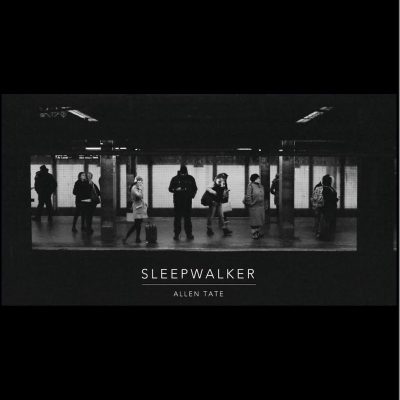 Allen Tate first received acclaim as the male lead singer of San Fermin. Bandleader Ellis Ludwig-Leone wrote about half of San Fermin’s songs for Tate’s distinctive baritone voice, which has been described as “sterling,” “gorgeous,” and “golden” by the likes of Rolling Stone and NPR. With San Fermin, he has performed sold-out shows across the world and has shared the stage with The Arctic Monkeys, The National, St. Vincent, and alt-J. It was during a three-week stay in Copenhagen with the band that Tate began composing Sleepwalker, an album that addresses the isolation he felt while staying in a foreign country. The album’s nine songs all “have something to do with feeling alone—physically alone, or… estranged.” Tate and Ludwig-Leone, who produced the record, tried to convey the sense of a “menacing bath: warm and enveloping, but with an element of anxiety.” Mixed by Matty Green (TV on the Radio, Yeasayer, Wild Belle) and 30 minutes in length, Sleepwalker does not attempt to offer grandiose statements. Instead, it shares honest observations of the many ways we often feel alone.

Ornamented with flowing guitar arpeggios and bassy brass, lead single “Being Alone” succinctly captures the album’s essence with melancholic wordplay and minimalist sounds that mirror Tate’s feelings of desolation in Denmark. “YDNF (Young Dumb Numb Fun)” explores Tate’s inner world as he grapples with feelings of insecurity and a desire to kill it with fast pleasure. “I wanted to translate my experience of feeling optimistic and doubtful at the same time, both into the sounds and the lyrics,” says Tate. His moody, deep vocals are instantly compelling, inviting listeners into a lush, conflicted inner world.