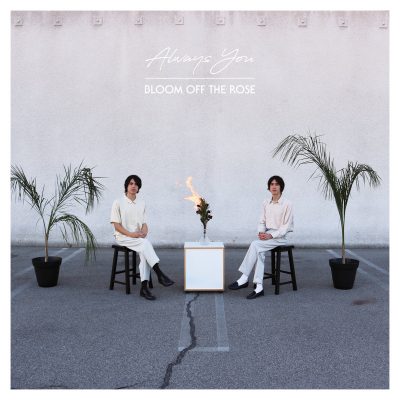 Brothers Anton and Christoph Hochheim of the LA-based project Always You – formerly known as Ablebody – are releasing their second album, Bloom Off The Rose, which was produced by Jerry Paper (aka Lucas Nathan), via Shelflife / Discos de Kirlian. The pair, who were previously part of the New York synthpop group The Pains of Being Pure at Heart, found acclaim from the likes of FADER, Stereogum, Brooklyn Vegan, Dazed, and DIY Mag with their full-length debut Adult Contemporaries. After four years full of changes, romance, discovery, and more, the duo now presents the much-anticipated follow-up under the name Always You. Bloom Off The Rose was developed in Christoph’s apartment and on the road with Jerry Paper, POBPAH, and Beach Fossils, with whom Anton has played. It features assists from bassist Jordan Sabolick with mixing/mastering provided by Kenny Gilmore (Weyes Blood, Julia Holter, Chris Cohen) and Josh Bonati (Mac Demarco, Wild Nothing, Slowdive). “The subject matter,” according to Christoph, “is life as vignettes. Snapshots and stories of my relationships, mainly the one I’m just coming out of as viewed from different moments in our timeline, often projected imagined futures and mourning losses yet to come.”

These sentiments of growth and change ring bright and true with the first single, “Black City Nights,” a track that thrives and reverberates in the spatial city light luster. Here, the Hochheims and company encapsulate the brightest moments of their past two decades of experience, seamlessly executing an assertive take on indie-pop economics, filled with glistening guitars and incandescent beams of synth. “Crimson Red,” another highlight, is in a similar vein. Christoph says it’s “a song about the push and pull of expectations and the unhealthy ways we manage them. It grapples with the narratives we craft and the barriers we put up between us to avoid the fear of vulnerability. “