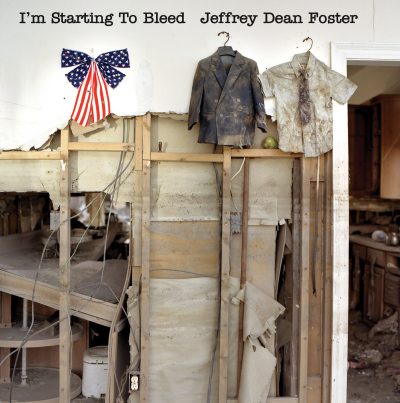 Over a rich career spanning four decades, Jeffrey Dean Foster has slogged it out in the trenches with The Right Profile, The Carneys, and The Pinetops; been courted by Clive Davis; scored an entire Angus MacLachlan film; racked up accolades from all the right magazines; and shared a label with Whitney Houston. Now, with not much more than a pile of home recording equipment and a raging case of cabin fever, he has produced an EP that sits proudly amongst his very best work. Over the past year, so many of us have landed on a combination of questioning privilege, power dynamics, our place in the modern world, and how to even handle ourselves when one of the most irresponsible things one can do is walk out the front door! In short, the I’m Starting to Bleed EP probably couldn’t have been made outside of the disorienting cauldron of 2020-2021.

When Foster watched the Black Lives Matter protests following George Floyd’s murder, he wanted to address the cruelty that prompted them. The result was “I’m Starting to Bleed,” a pastiche of late-period Bowie and “Cruisin’”-era Smokey Robinson infused with a creeping sense of dread. The remixed, reimagined “I’m Starting to Bleed (Pastoral)” strips the song back to its studs, trading the original instrumentation for guitars orchestrated by 1970s Film Stock. “When Was the Last Time” was recorded as a bare-bones acoustic performance at The Ramkat in Winston-Salem, North Carolina. Don Dixon (R.E.M., The Smithereens) suggested making a record out of it, noting that Johnny Cash magicked some of his TV appearances into album tracks. Dixon and Foster’s additions of drums, bass, electric guitar and strings, Beth McKee’s Wurlitzer, and Marti Jones’ pristine backing vocals turn it into a panoramic pop song. “Tell Somebody” is a wall of sound full of sonic nods to The Who, Big Star, and Teenage Fanclub at their Bandwagonesque best. “Headin’ Home” is a tossed-off ode to pandemic isolation, like the Flamin’ Groovies reluctantly following a stay-at-home-order. Dixon and Mitch Easter (Let’s Active, R.E.M.) pulled the mixes together, while Dave McNair (Bowie, Dylan, Patti Smith) mastered the record.

“If Winston-Salem had a voice it might sound something like the emotive, distinctive tenor of Jeffrey Dean Foster, one of our city’s musical icons.” – Winston-Salem Monthly