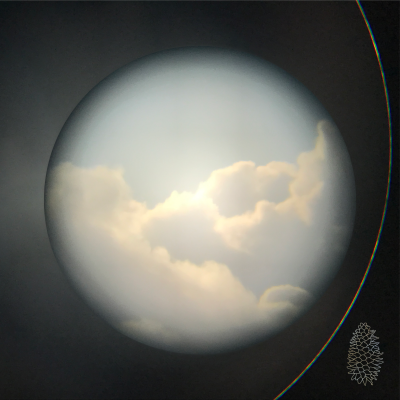 One (and Driftless) is the first release from Left Vessel, but it’s not the first project by Nick Byron Campbell. The sound artist and multi-instrumentalist has been a part of multiple bands, including Arizona, an Asheville-by-way-of-Brooklyn outfit that toured with the likes of Band of Horses and The Slip (featuring The Barr Brothers); Wages, an LA-based indie rock quartet that presented sound art experiences at galleries and creative events around the country including at New York’s Sheila C. Johnson Design Center; and Sincere Gifts, a bicoastal duo whose 2021 EP Ghosts Of America tackled the heavy societal issues over jaunty, jangly pop. Campbell also works as a composer for film and TV, and his first full feature film score – for Marcel Sarmiento‘s Faceless – is releasing this year. This newest project prominently features an instrument Campbell has dubbed “the arbow.” The arbow (a play on the Spanish arbol, for ‘tree’) is a live tree that is strung, bowed or plucked, and amplified — all in a way that doesn’t damage the tree. The core idea is to find a way of making “non-extractive” music: music that doesn’t hurt our world, but works with it.

One (and Driftless) was partially recorded in the woods of Minnesota’s Driftless Region during an artist residency that was focused on creating music with trees. It was mixed by Cory Hanson of Wand, who made sure listeners are able to literally hear the forest in those tracks. A great example is in “Victory Above,” which surreptitiously captures the sound of a woodpecker starting to work on the cabin just at the moment the lyrics mention a bird knocking. According to Campbell, “That was not planned! It could not have been planned.” Though experimental in its creation, the album is imminently accessible due in large part to Campbell’s adeptness with winding, catchy hooks like those found on “This Year Be,” “Your Winter,” and album opener “Arrival.” Taken as a whole, One (and Driftless) is a collection of songs about transformation: ecological, societal, personal, and romantic.

“Natural sounds of the woods are carefully layered within the gentle guitar fingerpicking, dreamy vocals and harmonies, and swells of strings… Tastefully composed and carefully constructed.” -Popmatters