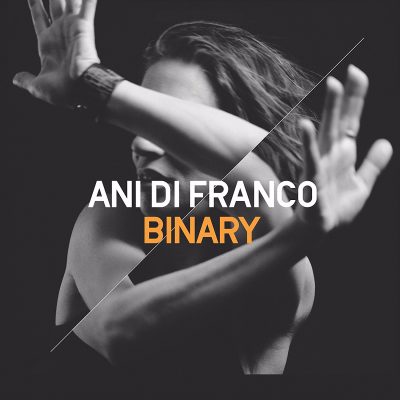 Ani DiFranco says Binary, her 20th studio album, is inspired by her desire “to try to push society to a better place.” This may be a turn from her more inward-focused 2014 LP Allergic To Water, but it comes as no surprise from someone who has long been recognized for her entrepreneurship, social activism, and outspokenness. She began her career in 1990, releasing a self-titled debut album on her own label and finding remarkable and unprecedented success in the early days of the Internet. Through the Nineties and early 2000s, she cultivated a loyal fanbase by relentlessly touring and releasing an album almost every year – in time, DiFranco found herself on the cover of magazines like Spin and Magnet; sold several million albums; collaborated with legends including Prince, Utah Phillips, and Dar Williams; and paved the way for a generation of self-propelled artists and activists by opting to do everything herself at a time when being “DIY” was not a common path to notoriety. After the 2016 election, she took action by performing at a Planned Parenthood benefit with The National and Sleater-Kinney during the Women’s March on Washington. With the release of Binary and her upcoming tour, DiFranco steps further into the fray and reclaims her status as a feminist icon and compelling conscience for the indie movement.

Mixed by Tchad Blake (Pearl Jam, The Black Keys), Binary is a sonically bold affair that offers a wide range of perspective and musical scope while sounding smooth, dynamic, and funky. DiFranco’s longtime rhythm section – consisting of bassist Todd Sickafoose and drummer Terence Higgins – grooves mightily behind her signature staccato guitar and soulful vocals, and the album also features some all-star guests including virtuoso violinist Jenny Scheinman, keyboard wizard Ivan Neville, legendary saxophonist Maceo Parker, and bassist Gail Ann Dorsey (David Bowie, Tears For Fears). Bon Iver’s Justin Vernon provides vocals on the tense “Zizzing,” an impressionistic number in the midst of an album DiFranco describes as “Big ‘P’ political.” According to her, “an underlying theme [of the album]… is the idea that autonomy is a fallacy—nothing exists except in relationship to something else.” She tackles the challenge and necessity of teaching non-violence with “Pacifist’s Lament” and the need for empathy in “Terrifying Sight,” while “Alrighty” ridicules patriarchal religiosity and “Play God” lambasts its oppressiveness. But while Binary may seem like a response to current events, its songs were written prior November 2016. “I’m not surprised,” DiFranco says. “Over 25 years, I’ve found that my songwriting is often full of premonition. It shows me, in a deep and spooky way, how we know things on levels below consciousness… I’m just happy to have some good tools in my toolbox to address what’s happening now—the feminist diatribes are turned up nice and high on this record!”

“[On Binary, DiFranco is] an artist in her fourth decade of playing music trying to surprise herself and make new sounds. It’s an unprecedented mélange. Binary... could be the record that wakes you up to the world.” -NPR

“On Binary, DiFranco casts a vast net across influences as she hones deeply humanist social commentary… Music so narcotic, the listener gets lost in the melody and groove long before they realize what truths these songs contain.” -Stereogum