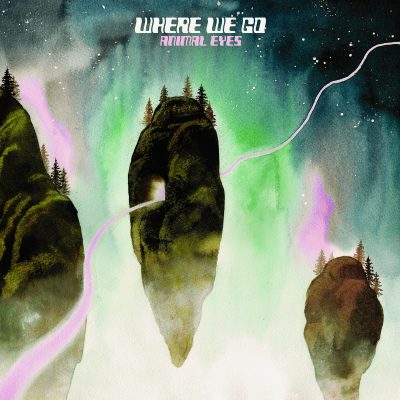 Since Animal Eyes moved to Portland from Alaska five years ago, the band has progressed steadily towards the edges of where rock, pop, and psychedelia meet. Their 2013 release, Ursus, saw the band pulling away from the folk-infused compositions of their 2011 debut Found in the Forest and towards the realm of angular rock music. Their experiments with pop formulas, along with their energetic live performances honed through extensive touring on the West Coast, have landed Animal Eyes festival spots at SXSW and Treefort Music Festival as well gigs alongside indie heroes Foals and Menomena. Now, the band returns with Where We Go, a musically accomplished and massive-sounding collection that showcases the band’s signature off-kilter grooves, twisted song structures, and layered vocal melodies that conjure comparisons to The Dirty Projectors and Animal Collective.

Where We Go was written during turbulent times. Relationships were ending and beginning, a good friend died, and a brother nearly died. The album attempts to sort out how romantic and familial relationships shape everyone involved in them, and how they continue to affect identity even as those people move away from each other, spatially and emotionally. But while the seriousness of this subject matter is apparent musically on songs like the dirge-y “Heave (Nome),” songs such as “Mushroom Hunter” and “Zeke, The Wizard” shimmer with a certain light-heartedness that reflects the silliness and awkwardness of the human learning experience. All together, Where We Go is a stunningly diverse-yet-cohesive album that densely layers elements of synth-pop, operatic rock, post-punk, prog, and folk into a grandiose and original whole that is greater than the sum of its parts and sounds like it’s been emitted from the cosmos.

“You can hear the influence of Animal Collective and Grizzly Bear, but best of all you notice the confidence this band shows on their third release.” -PopMatters

“Where We Go is sonically adventurous and detailed… but songcraft is still the primary objective here.”  -The Portland Mercury