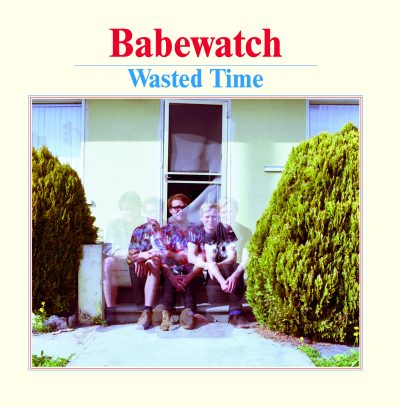 Babewatch originated at UC Santa Cruz, where guitarists/singers Peter Kegler and Callum Beals met bassist Chase Eiseman and drummer Eli Lyons. Their earliest songs, with titles like “Guys Hanging Out,” were designed as anthems for the lively drunken house parties around the school, where the boys honed their skills as surf-inspired ragers and gained respect for putting on the most fun shows in town. The band moved to Oakland after graduating, honing their musical chops via extensive touring through the West Coast and shows in support of acts like King Gizzard and the Lizard Wizard, La Luz, Diarrhea Planet, and more. Wasted Time, Babewatch’s debut full-length album, is a culmination of the band’s evolution that retains their surfy tone while incorporating the influence of the East Bay’s garage and post-punk scenes and reflecting the boys’ expanded musical ambitions.

No longer content to merely write about hanging out, songs like the folkloric ode “Brian” and the reflective “No Sleep” and “Wasted Time” demonstrate the band’s lyrical maturation, while tracks like “Get It Together” and “Kelp Monster” find the band pushing its own musical boundaries while maintaining the jocular energy that made Babewatch a hit in the first place. The LP rocks from beginning to end, highlighting the band’s penchant for writing pop melodies and Kegler and Beals’ adeptness at crafting slick, reverb-drenched guitar hooks.

“… A common love for 90s music exists within the band, which includes the likes of Pavement, Silver Jews and Weezer, and although not deliberate influences, they may have played a part in developing the sound.” -The Bait Shop

“Dreamy fuzz-laced punk… Babewatch has its own quality somehow, with a genre we just haven’t seen yet. You have to imagine a band playing live at the X-Games and there are skateboards flying over their heads as they sing. Well, it’d be the same type of idea for Babewatch only with the beach instead of a vert ramp.” -Raised By Gypsies