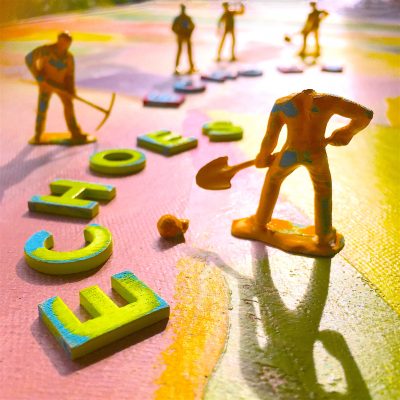 Artichoke’s newest album, Echoes, is a collection of songs about songs, including ten stylistically-warped covers alongside four originals. Timothy Sellers (Artichoke) and musical guests recorded this oblique reinvention of pop music from the twentieth century at his studio in the Highland Park neighborhood of Los Angeles – an older part of town with a hilly terrain that has provided much inspiration to Sellers over the course of his 10+ album career with Artichoke that includes LPs such as 26 Scientists (an album truly about scientists that earned Sellers a feature in The New York Times), Etchy Sketchy Skies, and Bees.

The album kicks off with “The Devil’s Song,” an original song about earworms sung by a man afflicted by the ultimate earworm, and also includes Sellers’ reluctant modern-day political song, “Two Cats Watching the News.” Other originals include “Hot Fools;” a menagerie of ducks, peacocks, and hipsters; as well as “How Mick Jagger Got His Lips” – a rock origin story with lyrical shades of The Devil and Daniel Webster and a riff that nods to Cream. Sellers’ choice of covers is eclectic, with selections from The Kinks, Blur, John Lennon, Camper Van Beethoven, Jimmy Buffett, Tom Waits, Robyn Hitchcock, the Ramones, Hank Williams, Johnny Cash, and Billie Holiday. Perhaps the most unexpected amongst the lot is Buffett’s overplayed “Margaritaville,” which Artichoke outfits with a sitar and minor chords in a test case to answer the question of just how far a song can be stretched before it becomes something else. “Imagine” gets re-imagined in psychedelic 6/8 time. “Take the Skinheads Bowling” is the inspired multi-tempo follow up.  Williams’ very last song grooves like early Beck with a flock of crows and a distorted drum kit,  while “Folsom Prison Blues” is sung from high atop a shoegaze plateau. The album concludes with a rocking postmodern take on “What a Little Moonlight Can Do.”

“Wonderfully obsessive… Artichoke makes music for kids and drunks… Poppy melodies and seemingly innocent lyrics about bees… which take on a darker subtext the older and more jaded you get.” -LA Weekly