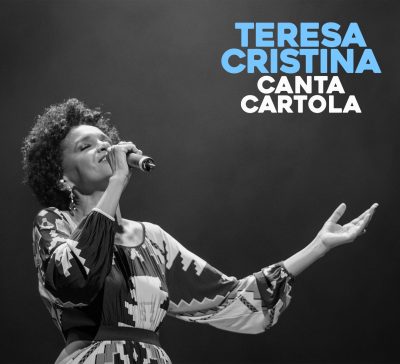 Spend an evening at the Theatro Net in Rio de Janeiro with Teresa Cristina as she offers tribute to one of Brazil’s most beloved guitarists, composers, and sambistas –  Angenor de Oliveira (also known as Cartola). Highly popular in Brazil, Cristina is an icon of samba loved not only for her originals but also for often interpreting other classic sambistas such as Nelson Cavaquinho, Antônio Candeia, and Paulinho da Viola. The singer’s most recent release since 2007’s Delicate, Canta Cartola is an 18-track live album, comprised solely of classics by a man who composed upwards of 500 songs and won hearts in Brazil and beyond through his mastery of elegance, emotion, and relatable complexity.

On Canta Cartola, Cristina delivers a beautifully soothing and nostalgic performance. The album begins with “O Mundo É Um Moinho,” a Brazilian staple that translates to “The World Is a Mill,” suggesting that it grinds you up. Each track is introduced by classical guitar, played by Carlinhos Sete Cordas, that immediately sets the tone. This is exemplified by the fluttery, hopeful opening to the apologetic “Evite Meu Amor,” where Cristina sings “Ferido está seu coração / E peço-te perdão” (“Wounded is your heart / And I ask your forgiveness”). Other highlights include the somber “As Rosas Não Falam,” which features a ghostly, hypnotizing chorus, as well as the rosey closing track “O Sol Nascerá (A Sorrir),” which demonstrates the dynamism of Cartola’s arsenal and Cristina’s impressive vocal abilities. The minimal arrangements are intimately engaging, drawing attention to the varying emotions weaved throughout the performance.

“Teresa’s artistry really shows. Her elegance on stage, the simultaneous spontaneity and decorum of every gesture, the humor, the tone, impeccable intonation—all combine in this true creator-singer […] [Cordas] plays with such a richness—he has all the history of bossa nova and root samba … All Brazilians should see and listen to what happened at Theatro Net Rio that night.” –Caetano Veloso, legendary Brazilian composer, singer, and guitarist

“Canta Cartola feels fully embodied, as if Ms. Cristina had written the songs herself. There’s no sentimental distancing or fetishizing of the songs. She’s totally engaged in them; she laughs while singing them, and she dredges the beauty out of them.” –New York Times