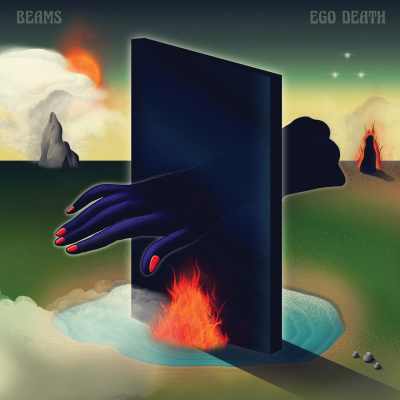 Ego Death sees Beams – the psychedelic folk-rock band that formed in 2011 in Toronto, Canada – moving in a bold new sonic direction that puts loud guitars center-stage but still makes room for the airy acoustic instrumentation that has defined its sound until now. This evolution was the result of singer/songwriter Anna Mērnieks-Duffield choosing to move from banjo to electric guitar and take a bigger role at center stage. Tracked at Union Sound Company in Toronto by Alex Gamble (Fucked Up, Alvvays), Ego Death was recorded mostly live off the floor. Mērnieks-Duffield’s newfound centrality as frontwoman brings the band full circle, back to the start of its origin story. Beams began in 2011, when she sent out an open invitation to fellow musicians to help her perform her songs. They honed their sound through residencies at Toronto’s iconic roots-rock venues like the Dakota Tavern, as well as DIY shows in garages, basements, front porches, and living rooms, connecting with acclaimed producer Peter J. Moore (Cowboy Junkies) for their debut album, 2013’s Just Rivers. The success of that record helped the band break into the US market, leading to a connection with Chicago post-rock pioneer John McEntire (Tortoise, Broken Social Scene), who tracked their 2015 single, “The Gutters and the Glass.” For their second album, Teach Me to Love (2018), Beams decamped to Union Sound Company (METZ, Weaves). While that record was the product of crisis and trauma, Ego Death is the joyful sound of recovery.

The record is a narrative song cycle inspired by the concept of the “hero’s journey” or monomyth. Ongoing mental health challenges previously threatened her partnership with Beams drummer Mike Mērnieks-Duffield. “I had a rough childhood. My trust issues made me break off our first engagement,” she says. “And then in the aftermath, I decided to start getting therapy. Ego Death is a collection of songs about working through different stages of my life.” Happily, the couple were married in the fall of 2019. In the end, Ego Death is about shedding past ideas of self and embracing the joy of transformation.

“Swirling guitars, beautiful vocal layers and a delicate balance of grit and beauty… I think fans of Tunng and Cat Stevens will get a huge amount out of Beams.” -Higher Plain Network