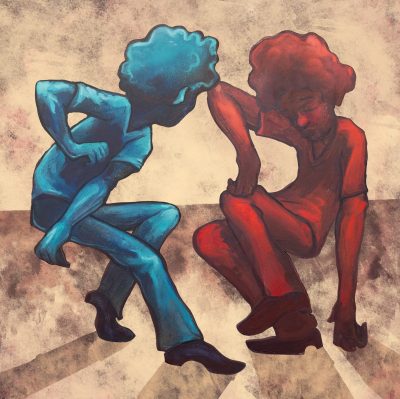 When Sunny War speaks, her mind roves endlessly, jumping between topics and spilling out rapid fire thoughts like her wildly inventive guitar playing. The pandemic has driven many away from their creative centers, but War has been uncommonly busy. She founded a Los Angeles chapter of the nonprofit Food Not Bombs, marched for Black Lives Matter, and found time to cut a new album at her favorite spot, Hen House Studios in Venice Beach. War’s last album brought her praise and led to a powerful Tiny Desk performance at NPR, yet War has shrugged off expectations on her new LP Simple Syrup.

The pandemic has been a crucible for Sunny, burning away the parts of the old world that didn’t truly matter and leaving her with a new purpose. War’s new songs touch on everything from romance to politics, jumping easily between larger concepts like the expectations for famous Black women in American art (“Like Nina”) and smaller ideas like “Kiss A Loser,” her ode to her own drunken self in relationships. One of the more powerful songs on the album, “Deployed and Destroyed,” is about a friend of War’s who is an Iraq War veteran suffering from PTSD on the streets. Musically, Simple Syrup has a vibrant, loose feel that is more focused on the interplay with the musicians than her previous releases. War made the record at Hen House Studios with Harlan Steinberger, whose Venice Beach studio has become a central hangout for recording artists and friends like Micah Nelson (Particle Kid), avant-jazz duo Black Nile, and Jamaican nyabinghi player Ras Michael. On Simple Syrup, Steinberger and War focused on the players who form the core trio with War at her live performances: bassist Ayron Davis, with whom War shares a punk rock bond dating back many years, and drummer Paul Allen. Hen House drew more friends to the recording sessions; one day Angelo Moore from Fishbone stopped by the studio to add background vocals and theremin to the song “Eyes,” fellow Venice Beach musician Milo Gonzalez (Insects Vs. Robots) guested on electric guitar throughout the album as well. “Harlan is really good and open minded, and he records more old school,” War says. “He’s always trying something new in his studio and learning new things.” According to Steinberger, “Sunny has probably the best feel of any musician I’ve ever worked with. For me she’s like Thelonius Monk, though in a different kind of music. Her sense of space and time and rhythm is unparalleled.”

“Tricky acoustic-guitar parts that sound more than a little like such British pickers as Richard Thompson and Bert Jansch… And her vocals boast the bluesy alto of a Meshell Ndegeocello or Joan Armatrading.” –Paste