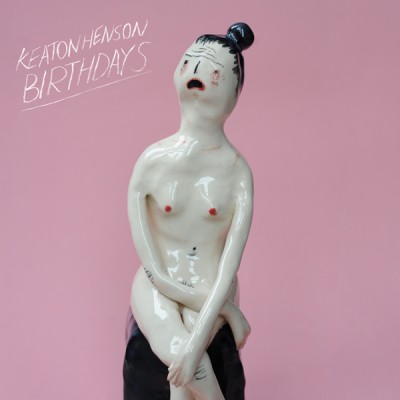 You hear a voice in a room. It is tender and gentle, but it bites at your bones. You hear a guitar’s golden echoes, creating a cocoon you can’t leave. You hear the voice of a 24-year-old man whose songs, artwork and poetry are known by hundreds of thousands of people around the world. The voice in the room, Keaton Henson, was born in the dying days of the 1980s. His heroes then were artists and illustrators like Edward Gorey; his heroes now are songwriters like Randy Newman and Loudon Wainwright. All three reveal the kind of artist Keaton strives to be: someone who understands the power of honesty, even when it is heartless, and how only that can make one’s art truly heartfelt.

Written and recorded in less than a year, a toughness veins throughout Keaton Henson’s latest album Birthdays, addressing the challenges of newfound and newly-lost love. In more ways than one, Birthdays presents the perils of getting what you wished for. “Lying To You” may sound like a love song, but it reveals how painfully easy it is to be with someone you don’t love. “Sweetheart, What Have You Done To Us” begins with quiet strums and blossoms into a ten-piece string section and French horns that strike at the listener’s core. “Teach Me” longs for someone to convince you to feel something for them, when in truth you feel nothing. And if his self-released full-length, Dear…, was beset by heartbreak, Birthdays presents a character whose desire for intimacy is haunted by an occasional urge for self-destruction.

Monsters are a recurring theme across the imagery of Birthdays – and perhaps, as “Kronos” in particular suggests, the true monster lies within. But the vanquishing of monsters and fear itself has marked Keaton’s progress since the release of Dear… His songs, while heartfelt, display a confidence and world-weary attitude beyond his years. And whilst the record resonates deepest once Keaton is alone with his electric guitar, it is also brought to vivid life by French horns, co-vocalist Jesca Hoop and a ten-piece string section. He writes songs with stories that are slow-burning, rather than quick fixes. Instead of shallow glamour, Keaton Henson brings us truth getting to the heart of us; and on Birthdays, we start to get to the heart of him.