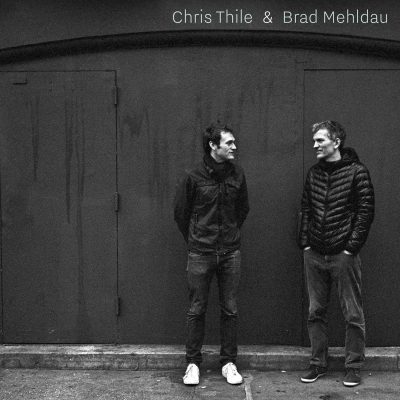 Mandolinist Chris Thile (Nickel Creek, Punch Brothers, A Prairie Home Companion) and accomplished jazz pianist Brad Mehldau first performed together in September 2011 as part of Mehldau’s residency at London’s Wigmore Hall. Of that performance, the Guardian wrote, “Mehldau struck up his signature rocking chord vamp over which lightly struck motifs swell to sensuous extended melodies. Thile kept cajoling him with percussive snaps, flying runs, and chords strummed fast enough to sound as seamless as a purring strings section, inducing Mehldau … to bat back the playful provocation with stinging rejoinders.” This bright, enticing energy is abundant on Chris Thile & Brad Mehldau, the duo’s full-length debut recorded at Avatar Studios after a two-night stand at New York’s Bowery Ballroom in 2015. They brought their show into the studio, exploring original compositions and an impressively eclectic stack of covers. The sessions yielded a brilliant, often freewheeling, live-in-the-studio double album that is thrilling in execution, employing just piano and mandolin along with Thile’s elastic and expressive voice (and, on “Scarlet Town,” Mehldau’s vocals too).

The set opens with the bold stroke of the co-written “The Old Shade Tree,” which features what must rank as one of Thile’s most unfettered vocal performances. Two of Thile’s originals address his relatively new role as a father with humor and honesty, and the two-disc set also features expansive takes on several covers including a heartbreakingly melancholic rendition of Joni Mitchell‘s “Marcie;” a version of Elliott Smith‘s “Independence Day” that forsakes lyrics to spotlight its evocative melody; and a rollicking, practically ribald version of Bob Dylan‘s “Don’t Think Twice, It’s All Right.” Mehldau’s arrangement of the standard “I Cover the Waterfront” is a daringly slow burn, and Thile matches it with a smoldering performance of his own. “I think we’ve found a way to play with each other that is quite unique,” says Mehldau. “A lot of what’s special about this project for me is the way we get beyond our instruments.”

“Chris Thile and Brad Mehldau come from different worlds but the same species, and whatever feels unlikely about their pairing is eclipsed by what feels perfectly natural. Mr. Thile, the mandolinist and singer with Punch Brothers, is a progressive-bluegrass pacesetter; Mr. Mehldau is the most influential jazz pianist of the last 20 years.” –The New York Times