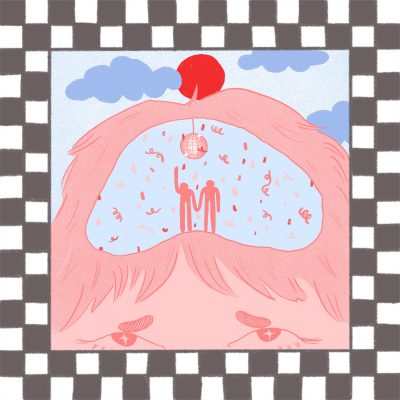 From September 2019 to early March 2020, Julia Bhatt experienced a whirlwind of life-changes: she released her first three singles (“Tall,” “Marco,” and “I’m Cool“), turned 18, and graduated high school. Just as she was really getting started – with the announcement of her first-ever tour, nonetheless –  the COVID-19 pandemic brought everything to a standstill. Holed up in Miami, several states away from her mentor and producer Elliot Jacobson (Ingrid Michaelson, Elle King, Vérité) in New York City, she started to write songs on Ableton Live rather than on the guitar – a whole new creative experience for her. This led to singles “Miami” and “Bird Girl,” as well as her debut EP 2 steps back, and now the it is what it is LP.

The collection is full of diverse, vibrant songs like “Confetti,” which Bhatt says “is for when you’re having a hard time, to just remember it’s not that bad, and it’s best to distract yourself than wallow.” “On My Shoulder,”  which depicts the classic concept of having an imaginary angel on one shoulder and an imaginary devil on the other, and “Cotton Candy,” a jangly indie pop song Bhatt describes as “a love song of sorts, not necessarily about someone, but more of a feeling that can come from someone.” With a powerful voice reminiscent of Amy Winehouse and Regina Spektor, Julia writes engaging, fun hooks with great beats, juxtaposed with honest storytelling that reflects observations about life in the melting pot of Miami, as well as reflections on her on-going struggles with depression.