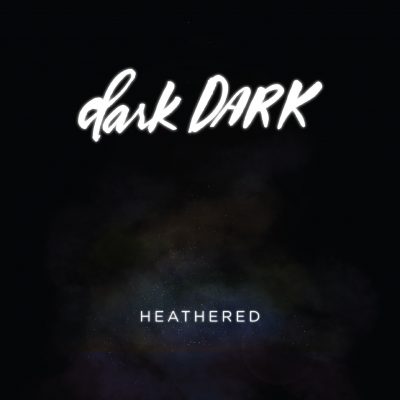 Heathered, the first release from production duo darkDARK, is a five-song EP of vibrant, punchy beats and luminous analogue synths that channel a futuristic pop sensibility while lightly alluding to 70s cinema and 80s synth-pop. “We wanted Heathered to take you in different directions emotionally,” bandmembers Genevieve Vincent and Chris James told Consequence of Sound. “We spent a lot of time on the production to try to make each song an environment for you to step into. The record revolves around relationships — everything from the first moments with someone, which can be so amazing and fleeting, to the times where you’ve forgotten who you both are, change, and evolve.” The EP was recorded over a six-month period between Vincent’s and James’ and studios in LA and Austin.

Heathered is immediately captivating, from Vincent’s and James’ sultry and subtle vocal melody at the beginning of “Moments” through the whirring, pensive fadeout of “Shelter.” Over the course of the record, DarkDARK applies John Carpenter-styled synths to direct, concise pop structures that feature compelling sonic surprises like the ripping electric guitar lines that tear through “Stay Close.” James and Vincent equally shared writing, composing, and singing duties throughout the EP. “Restless” features the lyrics and crystalline vocals of the critically-acclaimed, Minnesota-based songstress Haley Bonar (who has, since this collaboration, adopted the moniker Haley).

“‘Restless’ is one of 2017’s first great songs: a dreamy, sweetly throbbing electro-pop jam with a warmly soaring, heartfelt vocal at its core.” –NPR’s All Songs Considered

“darkDARK have managed to harken to all sorts of phases in electronic music’s history in a way that feels wholly original and forward thinking.” -Consequence of Sound