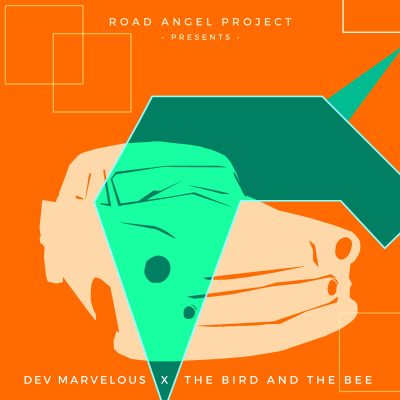 “It is always so incredibly flattering to have someone play or record a cover of a song I wrote, no matter what,” says Inara George of The Bird and The Bee. So, when Louisville-based producer, singer-songwriter, and pianist Devon Moore (aka Dev Marvelous) sent her an album’s worth of reinterpretations of The Bird and The Bee songs, George immediately asked if she could put them out. Road Angel Project Presents: Dev Marvelous X The Bird and The Bee is the result, and the sixth volume in George’s ongoing charity series in partnership with, and benefitting, the Sweet Relief Musicians Fund’s COVID-19 fund. “I’m very excited to be working on this release with Dev,” George says, “and it feels appropriate for the Road Angel Project, which, in addition to raising funds for musicians and music industry workers, is also a way for lesser known musicians to have a platform to be heard…. I was just blown away by his interpretations of our songs,” George continues. “Dev really made them his own, and it seemed obvious to me that he was a serious musician with his own unique vision.”

“Together, Inara and (her The Bird and The Bee bandmate) Greg Kurstin have created some of the classiest indie-pop gems of the mid-2000s to present day,” Moore says. “It’s always been a dream of mine to collaborate with Inara. Her voice and tone, paired with her clever, poetic lyrical ability are unmatched.” Moore credits Kurstin, who has written and/or produced songs for artists such as Kendrick Lamar, Paul McCartney, and Beck, as his “music production hero [and] one of the most badass multi- instrumentalists I’ve ever heard… I was inspired in 2019 by Interpreting The Masters, Vol. 2: A Tribute to Van Halen, and I set out to return the love with an Ella Fitzgerald-style songbook tribute to The Bird and The Bee’s work and artistry. I wanted to not just celebrate their music as a band, but their solo compositions as well.” As such, Road Angel Project Presents: Dev Marvelous X The Bird and The Bee includes one cover each from George and Kurstin’s solo catalogs. Finally, in addition to paying tribute to artists that inspire him, Moore’s stated goal through the creation of his original music and visual art is to unite and brighten the world around us, “no matter your skin, orientation, or music library.” He says, “Being a black, gay musician, I always look to incorporate my unique queer voice into a lot of my work. Similarly, I am very in touch with my spirituality.”