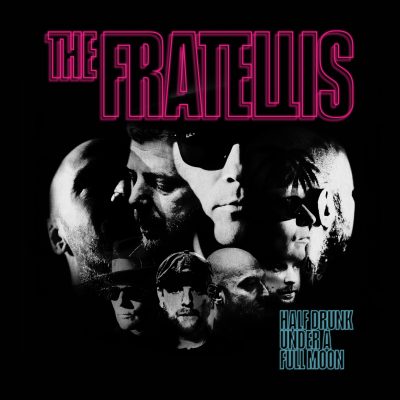 If you thought you knew The Fratellis, think again. Half Drunk Under A Full Moon, the Glasgowian trio’s sixth album, is a kaleidoscopic delight full of surprises, from its flamboyant title track and lush songs steeped in brass and strings to twists on the stomping sing-alongs for which they’re known. “There was a definite sense with the last record (2018’s critically-lauded In Your Own Sweet Time) that we’d reached the destination we’d always had in mind,” says Jon Fratelli, the band’s singer and songwriter. “With this album, the plan was to push [our] ideas even further. Often, we went overboard!” Recorded in LA with producer and long-time collaborator Tony Hoffer (Beck, Phoenix, Supergrass), Half Drunk Under A Full Moon boasts several firsts for the band: the first album, for example, where backing singers were brought in to bolster the huge choruses, and the first where the same characters from the last record return to stalk a lot of the lyrics. The most significant change though is in the style of the album, the result of a new approach to writing where the desired sound was decided upon first, which in turn dictated the songs.

The Fratellis – vocalist/guitarist Jon, with bassist/backing vocalist Barry Fratelli and drummer/backing vocalist Mince Fratelli – released their triple-platinum 2006 debut album Costello Music. That album contained the globe-conquering hit “Chelsea Dagger,” and it led to their victory at the Brit Awards for British Breakthrough Act in 2007. A successful second album Here We Stand followed in 2008, but this whirlwind of success came at a cost, and by the end of the decade the trio had split after burning out from their relentless life on the road. Since reforming in 2012, The Fratellis have gone from strength to strength, winning over a new generation of fans and enjoying a more sustainable type of success. Half Drunk Under A Full Moon finds The Fratellis at ease with who they are and where they are: a band who have not only survived but thrived, and are making the best, most confident, most ambitious music of their career. Half Drunk Under A Full Moon is a treasure trove of excess, and The Fratellis originally planned to release the album last year. Lead single “Six Days In June” hit the airwaves, revealing the trio’s jubilant new direction, just weeks before the world shut down. According to Fratelli, “We had a whole year’s worth of work that didn’t happen, but we knew it would come back around. As a band who have a loyal audience we know we’re in a fortunate position.” As the return of live music after the COVID-19 pandemic creeps closer, The Fratellis are primed to prove the power of pop to lift spirits and kickstart celebrations. “People are desperate to go back to gigs,” says Fratelli. “By pure chance, we’ve made an album that could really suit that mood of joy and release.”

“Costello Music sold more than a million copies and spent no less than 83 weeks in the charts. If you checked out after that, here’s some potentially surprising news: five albums later, the trio have released 10 classy, lush songs audibly inspired by ‘60s girl group doo-wop.” -NME

“The most colorful record of their career” -American Songwriter