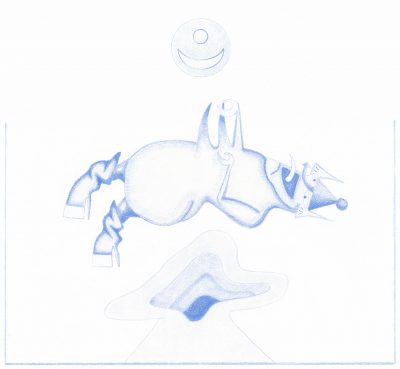 Raised in Venezuela, Devendra Banhart moved to California at age 14 and got his musical start as a busker on the streets of San Francisco as he attended art school there. He eventually dropped out of school to fully pursue music, first attracting international notice with his 2002 debut album, Oh Me Oh My… The Way the Day Goes By the Sun Is Setting Dogs Are Dreaming Lovesongs of the Christmas Spirit—a collection of recordings he had made for himself. Subsequent albums found him acclaim and led to collaborations with the likes of Beck, Antony and the Johnsons, Vashti Bunyan, Os Mutantes, Vetiver, performances with both Gilberto Gil and Caetano Veloso, and inclusion as part of a David Byrne–curated concert at Carnegie Hall. An accomplished visual artist, his enigmatic drawings have also appeared in galleries all over the world. 2013’s Mala, his Nonesuch debut, was described by Q as a “career-best” and by the Wall Street Journal as his “most concise, hushed and winsome effort to date.” Three years later, he returns with Ape in Pink Marble, an album written, produced, arranged, and recorded in Los Angeles by the singer/songwriter/guitarist with his Mala collaborators Noah Georgeson (Joanna Newsom, Cate Le Bon) and Josiah Steinbrick (Adam Green, White Fence).

Ape in Pink Marble is gracefully and generally subdued, with Banhart crooning lyrics that are somehow both somber and lighthearted over genre-hopping instrumentals that go far beyond the “freak folk” umbrella his earliest albums helped to establish. “Middle Names,” about running into a former love at Walgreen’s, serves as the album’s hushed opener, but Ape in Pink Marble also finds the artist indulging in more pop-oriented impulses as well. Tracks like the funky “Fancy Man” and the strutting “Fig in Leather” dip into a low-key disco mode, while “Saturday Night” even earned an unexpected comparison to “Hotline Bling” when it was posted on Stereogum this summer. Yet Ape in Pink Marble is less a departure than it is a gentle evolution, finding Banhart building naturally on the Latin-influenced, finger-plucked ruminations that initially made him a sensation. In an interview conducted by MPR’s The Current around the time that he was completing the album, Banhart explained how this new, expansive collection connects to his previous work: “I really feel like I’m singing the same old song… [but] there’s still a lot that’s been left unturned. There’s still more mystery to dive into. It’s like a big cave and I’ve still got the same flashlight that I’ve been exploring that cave with.”

“There’s an oneness with Banhart and his music on this album, an effortless grace signaling arrival in a stage of less conflict and fewer flights of fancy.” -Under The Radar

“Even compared to other folk artists, Banhart always manages to feel unbelievably present, like he’s performing in the next room over. That quality makes Ape in Pink Marble a truly strong record.” -The Line of Best Fit