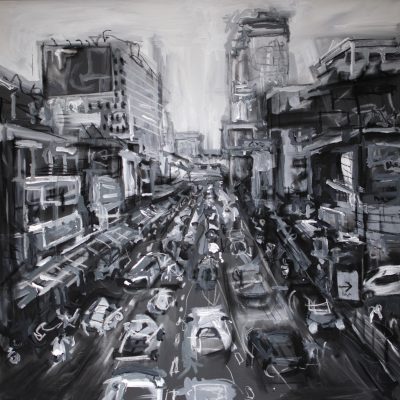 Over the course of eight pristine pop songs, John Francis Gerrard – the Calgary musician who has long performed under the name Francis Cheer – uncovers a common ground between shadows and radiance. While the music on his second LP, Black White and Grey, shimmers with a sense of effortless grace and polish, the time leading to the album was not quite as smooth. Over a period of nearly three years, Gerrard battled with bouts of mania, depression, and psychosis, eventually leading to a diagnosis of schizoaffective disorder. But rather than attempt to cast aside those difficult years as best-forgotten, he reflected upon them to inform his lyrics and worldview and create an album that acknowledges the multitudes of binaries in everyday life while searching out spaces beyond these rigid constructs. Gerrard played nearly all the instruments on the album at his own Electric T Cup Studio, enlisting the help of engineer Pat Palardy and drummer Chris Dadge (Chad VanGaalen, Lab Coast) after the initial sessions to bring the human touch to the beats and rhythms he’d originally programmed.

The result is a bright collection of finely-wrought songs, easily engaging yet full of nuance, inventive playing, and beguiling lyrical constructions. At times, he allows this perspective to manifest itself playfully, framing words and sentences in ways that encourage multiple interpretations. Yet the record also finds Gerrard coming to terms with a newfound frankness. “I decided to take that risk in order to have these moments of directness on the record,” he says, “like a diary of sorts.” To wit, the delicate sonic environs of “All 3” frame lyrics that are nakedly emotional, detailing an obsession with the number three that began during a bout of mania and has continued to act as a quasi-talisman for a place between two poles. The songs on Black White and Grey each provide their own diverting confluence of attributes: the seemingly triumphant big beat of “Find A Light” belies its confessional lyrics and subdued delivery; the title track has a wide-open and expansive feel, yet is dotted with intricate, understated production details; the kinetic guitar pop of “Northern Semantic” is immediately gratifying yet accompanied by oblique lyrics that require careful parsing; and “Deep End” is bright propulsive power-pop that recounts one of Gerrard’s first episodes of psychosis. The LP is imbued with the energy of the spaces between dualities, which Gerrard has struggled to realize in his life.

“Black White and Grey really does offer bright and gloom. Imagine a platform where each composition is its own identity – reaching to answer questions and create an alternate reality from the status quo. Francis Cheer provides that musical medicine.” -Glide Magazine

“[Francis Cheer] is genuine, candid, and unafraid of the vulnerability most people try to bury – a true artist.” – Imbue Magazine