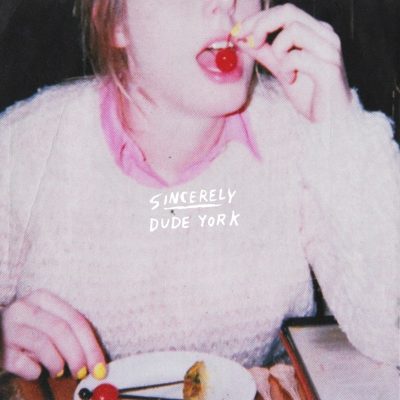 Dude York makes heavy pop for heavy times. The band was born in a garage in Walla Walla, Washington – a secluded berg known for long, hot summers and slow, cold winters – before singer/guitarist Peter Richards and drummer Andrew Hall moved to Seattle and met bassist Claire England. In the Emerald City, the three-piece honed their love of Jonathan Richman and Swedish pop to become a world-class act, opening for the likes of Mikal Cronin, The Oblivians, and Mudhoney and releasing 2014’s debut LP Dehumanize via Help Yourself Records. Recorded by longtime Sleater-Kinney producer John Goodmanson and JR Slayer (of The Blood Brothers), their Hardly Art debut Sincerely couches its themes of anxiety and eroding mental health in rock tracks that amp up the sweetly melodic crunch of powerpop with massive distortion and bashed-to-heck drums.

Sincerely opens with a blast—the massive opening chords of “Black Jack,” a squealing track that blends the swagger of glam with the heavy riffing and ringing hooks of arena rock. Richards, England, and Hall have been through a lot during their four years of playing together, and tracks like the speedy, dark “Paralyzed,” the CCR-echoing “Twin Moons,” and the frustrated-yet-ebullient “Something in The Way” combines lyrics that play on the trio’s travails with jumpy, riff-heavy distorto-pop. England handles lead vocal duties on the zinging kiss-off “Tonight” and the slowly grinding “Love Is,” the first time she’s done so on a Dude York record. “Time’s Not on My Side,” an intimate farewell note sung atop jangling acoustic, caps the album. All told, it’s a loud and sweaty testament to the power of friendship and the solace that can be found through art.

“It’s a song that calls both for unity and self-awareness, wrapped in buoyant riffs that sound straight from the late ’90s.” –The FADER

“Rock ’n’ roll at its most fun and unabashed.” -City Arts