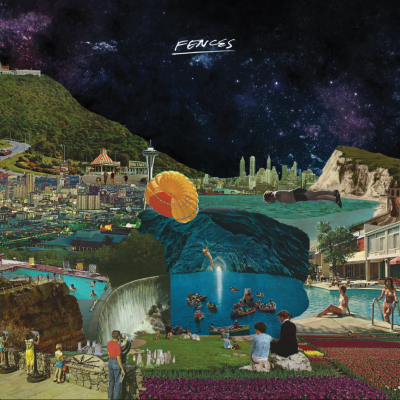 As Fences, Chris Mansfield pours his everything into writing musical missives that hold a mirror to his foibles, his heart, his hurt, and his confusion. Drawn to experimental jazz, he ignored pop and rock music as a young man and went to school at the prestigious Berklee College of Music to study double bass. It was there that a roommate turned him on to Elliott Smith, which led to what Mansfield calls a “super crazy awakening.” The fragility of Smith’s music and delivery spoke to him as the son of a single mother who spent his childhood traveling across the country, and hearing it inspired him to drop out of school, trade his bass for an acoustic guitar, and begin channeling his emotions into songwriting. The raw yet poetic quality of his music – built largely on Mansfield’s strumming and sweetly torn vocals – piqued the ears of Sara Quin (of Tegan & Sara), who produced his 2010 self-titled debut. He followed that in 2015 with Lesser Oceans, which offered bolder hooks and a broader sonic palette to supplement his sparkling confessionals. Now, Mansfield returns with To The Tall Trembling Trees, a self-produced EP that finds the artist starting a new chapter in his life after the birth of his daughter, Cedar.

“Hunting Season” opens the collection with a gently emotive piano line and a story about his mother and former stepfather, while “Cedar Wesley” explores his feelings as a new father with a simple lyric: “Both our lives collided and they caused a new one.” The brief and anthemic “Pale Paper” demonstrates Mansfield’s ability to use hooks to elevate difficult subject matter – in this case, about wasted time, a wasted life, being “owned” by a significant other, and feeling abandoned by God. Mansfield’s music has always been visual, as his words inspire wistful, nostalgic snapshots; “I try to give myself goosebumps,” he says about his lyrical approach. His melodies, however, are what make his words stick. This is most apparent on the driving “The Fountain” and “Buffalo Feet,” which also offers skittering beats and a sing-along chorus. Lauren Zettler, of New York pop-rock duo Savoir Adore, provides guest vocals throughout the EP.

“The perfect balance of uplifting instrumentation and depth in lyrical content.” -Renowned for Sound

“Mansfield may be writing simpler songs than in his jazz days, but the years of study show in his spare, elegant arrangements and his easy way with a catchy chord progression or melody.” -The Stranger