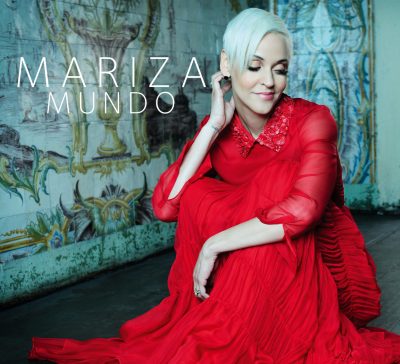 It’s not often that Mariza’s name is seen without mention of her significance within the contemporary world of fado, an iconic Portuguese genre that is generally typified by its melancholy tone and use of guitars and mandolins. The singer has worked or shared a stage with many notables, including Kiri Te Kanawa, Gonzalo Rubalcaba, and Miguel Poveda. She has left her musical footprint in over 30 countries and earned over 30 platinum awards; in fact, each of her records has reached the top 5 in Portugal. Called “the greatest contemporary singer of fado” by Uncut, Mariza may even be the most successful performer in the genre since the late Amália Rodrigues. This week, Nonesuch Records has released Mundo – unleashed internationally last fall to critical acclaim – in the United States. The record takes a step away from 2010’s Fado Tradicional by combining the traditional style with sparkling pop and electronic elements in a manner described by Songlines as “bold and expansive” in its ambition.

Mundo opens with “Rio De Magoa,” a perfect representation of fado and Mariza’s legendary abilities within the genre, and quickly builds with the yearning “Alma,” about reconnecting with a lover who has filled her soul with pain. Mariza also explores English lyrics with a catchy cover of “Padoce De Ceu Azul” by Lura, another popular Portuguese singer. Other standouts include “Paixao,” which demonstrates Mariza’s rich vocal range from ethereal whisper-singing in the verses to a powerful overdubbed chorus, and her bouncy, playful arrangement of Amália Rodrigues’ classic “Anda O Sol Na Minha Rua.” Each track features a golden combination of stringed instruments and a swaying rhythm section along with Mariza’s masterful singing.

“The songs range from the sturdy fado classic ‘Anda O Sol Na Minha Rua’ through to Argentinian tango; a lilting, a keyboard-backed song from Cape Verde, partly sung in English; and fado-tinged Portuguese ballads.” –The Guardian

“Mundo [is] an unalloyed triumph, her artistry hitting dynamic new heights and her voice expressing every emotional nuance” –Songlines